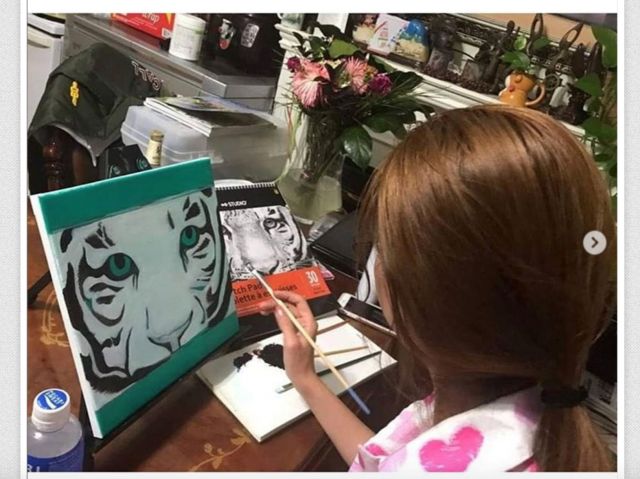 Following an investigation by the SBS News Program 'Curious Stories Y' Yoon Ji-oh is under suspicion of having plagiarized art for her book 'The Thirteenth Witness'. Investigators for 'Curious Stories Y' found the tiger illustration that appears in the third edition of the book to be very suspiciously similar to this image by artist Peter Finnie, which is available for sale on a stock photo website.

In a publicity photo Yoon Ji-oh can be seen copying the picture from the cover of a sketch book. It is not clear that she is aware that copying images in such a manner for commercial sale is illegal without express permission from the author. The image also appears to have been on a prominent display at the ArtExpo NY show this past April.

The news is not welcome for Yoon Ji-oh, who is already dealing with domestic legal action from a collaborator that her book contains deliberate lies. Persons relevant to Jang Ja-yeon have also questioned the extent to which Yoon Ji-oh knew the woman whose death was a flashpoint for the Korean entertainment industry, and politicians pushing for investigation into the Jang Ja-yeon case have distanced themselves from her.

In a statement provided to HanCinema, Peter Finnie has stated that he is researching the extent of the issue at present, and is attempting to contact Yoon Ji-oh's publisher among other relevant persons. The episode of 'Curious Stories Y', which is expected to have more details on the plagiarism allegation, will air on Friday June 14th at 8:55 PM Korean Standard Time on SBS.

UPDATE: Peter Finnie and Yoon Ji-oh have reached a settlement regarding the case in question. The Peter Finnie who appears in the comment section below is the same person referenced in this article.