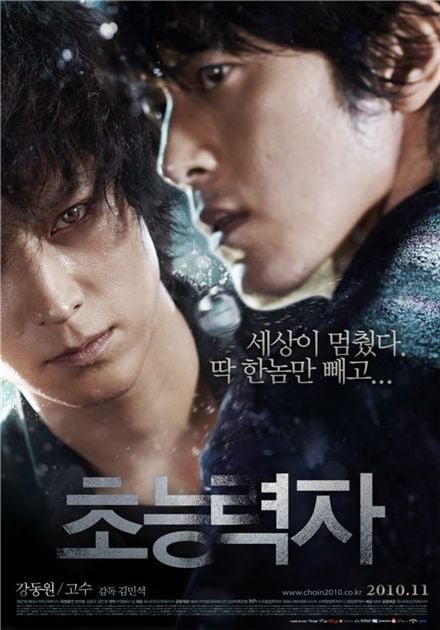 New Korean film "Haunters", opened on top of the local box office over the weekend, according to the official Korean Box Office Information System (KOBIS) on Monday.

"Haunters", starring actors Go Soo and Gang Dong-won, led the box office chart from November 12 to 14 with a total 676,641 viewers to gross over five billion won during the three-day period.

The film, about a fight between a man with a supernatural power and another who can resist it, had seen the highest number of advance ticket sales so far this year on the day of its release on November 10.

Following behind was the previous week's winner "The Unjust" which attracted 272,254 viewers during the same period to gross over 2.1, accumulating over 2.17 billion won.

The Hwang Jung-min and Ryoo Seung-bum starrer which tells of widespread corruption within a prosecutors' office had maintained its place atop the chart for two weeks straight.

The action pic starring Denzel Washington and Chris Pine is centered on a quest to stop an unmanned runaway train heading toward a city.

Other films that continued to hang on to the top 10 included the U.S. action-packed "Red", local comedy "Love on the Debt", 3D animation "Legend of the Guardians: The Owls of Ga' Hoole", another U.S. thriller "Devil", local suspense film "Midnight FM" and Chinese disaster film "After Shock".

The newcomer in the chart was "The Disappearance of Haruhi Suzumiya", a Japanese animation which opened in theaters on November 11.

""Haunters" tops weekend box office chart"
by HanCinema is licensed under a Creative Commons Attribution-Share Alike 3.0 Unported License.
Based on a work from this source