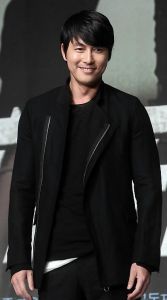 Actor Jung Woo-sung, who has concentrated on his film career in recent years, will star in a 20-episode Japanese TV miniseries based on the manga "City Hunter", according to the Yonhap News Agency. The miniseries will be a Japanese-Korean co-production and is scheduled to air early next year. Jeong, who will play the protagonist Ryo Saeba, will be the only Korean actor cast in the series.

The manga was adapted into a movie several times in Hong Kong, the most prominent version being the one released in 1993 with Jackie Chan playing the main character.

Jeong is quite popular in Japan since his 2004 film "A Moment to Remember", which is one of the highest-grossing Korean films released in Japan.

He is currently filming the highly anticipated "The Good, the Bad, the Weird", in China, which also stars Lee Byung-hun and Song Kang-ho. The film is being directed by Kim Jee-woon, and is described as a revisionist western set in 1930s Manchuria.

"Heartthrob Jung Woo-sung to Star in Japanese Drama"
by HanCinema is licensed under a Creative Commons Attribution-Share Alike 3.0 Unported License.
Based on a work from this source