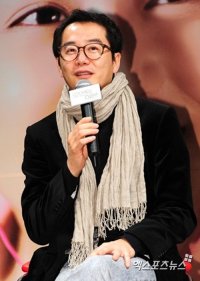 Director Jang Jin is versatile. He started as an up-and-coming playwright and then became a leading drama director. But he never stopped toying with new ideas and is now one of the most widely recognized filmmakers in Korea.

The film involves gangsters, a topic that may well spark some grumblings from those weary of this overused genre of choice for Korean moviemakers. But, hey, this is a work by director Jang, and his specialty is to surprise audiences in refreshing ways.

"I feel great pressure, and have to take full responsibility for my movie", Jang said in an interview with The Korea Herald.

Jang, a talented storyteller, said the reputation he has established is now putting too much pressure on him to deliver time and time again. "People call my new work a 'Jang Jin movie', and expect the film to be great and different, which I hope it is, but I'm feeling the stress", he said. Jang, a talented writer, does not spend too much time in coming up with an outline of a story he wants to tell. The scenario for "Righteous Ties" took just six days to develop in 2002. But the question remains: why does he want to tell a story based on this extremely trite genre to Korean audiences who have to deal with a barrage of gangster comedies on a monthly, if not weekly, basis?

"I visited Yeosu and Suncheon area in Jeolla Province where local men often pursue the gangster life, and I thought a story about those Jeolla men would be cool", Jang said. The fact that his father's hometown is also in Jeolla Province also motivated Jang to work on the risky project.

The primary reason, however, is to challenge the preconception that gangster films are inherently and inevitably boring, Jang said.

"I wanted to enter into the conventional genre and create something different. I wanted to show some aspects that are not dealt with by other gangster movies in Korea. In fact, there are not that many well-made gangster films", he said.

"Someone Special", Jang's 2004 romantic comedy featuring Jung Jae-young and Lee Na-young, is an example of fully embracing a conventional genre and then making something different. The film, though billed as a romantic comedy, does not follow the familiar formula of the genre: main characters do not dare hold hands, much less attempt to kiss. But it works. It's funny, provocative and even inspiring. That is a style known as Jang Jin movie.

Jang said the gangster noir film is a genre that deserves more attention and respect, so he invested a great deal of time and money on the project. The movie gobbled up 5 billion won ($5.21 million) in production cost and took six months to shoot, with another two months in post production - a relatively longer filmmaking period than other mainstream films.

In "Someone Special", Jung Jae-young played the character Chi-sung. In "Righteous Ties", he plays a gangster-fighter with the same name, a technique that constantly reminds the audiences of what they are really watching - a work by Jang Jin and his favorite actor Jung Jae-young.

Jang, the 35-year-old director whose scenario for "Welcome to Dongmakgol" brought him fame and fortune, said his success so far is largely due to his passion of telling stories.

"I really try to tell a story well even when I talk with my friends, just like a mother telling an interesting tale to her child", Jang said. "What matters is whether the audience reacts strongly to the story, and a precondition for a successful storytelling is to tell it very earnestly".

Jang said even a small conversation should have dramatic effects, reversals, unique style and a distinctive pace. But then again, his attempts sometimes fail.

"Now, it seems like I'm not pulling it off as often as I used to", he said.

After a brief pause, he resumed the conversation with a big smile: "That's why I'm not talking very much these days".

"[HERALD INTERVIEW] Jang Jin breathes life into gangster film"
by HanCinema is licensed under a Creative Commons Attribution-Share Alike 3.0 Unported License.
Based on a work from this source