[HERALD INTERVIEW] Marco sprints to stardom with his boyish charm 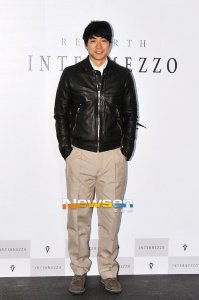 Within minutes, however, he begins to let loose, and bursts into his signature boyish staccato laugh. Marco in real life turns out to be like Marco on television, or at least a slightly toned-down version.

Although already enjoying an modeling career and several stints in movies, Marco got his biggest break in the entertainment scene this year by acting as a pseudo-married couple with pop star Son Dam-bi on MBC's semi-reality show "Just Married".

A third-generation ethnic Korean from Argentina, Marco raised eyebrows and left people asking, "Who is that guy?" when he appeared on the hit show featuring four different celebrity couples.

His handsome looks and sculptured physique contrasted with an inarticulate Korean accent and uninhibited expression of his feelings, kept people, especially women, glued to the television.

"Yes. I think I am not that much different from how I appear on television", Marco said in an interview on Tuesday.

So can he feel the rising fame since he joined the show in September?

Marco gives the innocent reply that viewers would expect from him: "People are much nicer to me now".

Born with the given name Marco and the Korean surname Lee, he and his family have lived in Argentina since his grandfather moved there in the early 1970s.

His parents run a clothes shop and he has an older brother and a younger sister. Marco said he was always a carefree child, and always did what he set his mind to, like earning money during the summer to travel around during winter breaks.

When asked what prompted him to come to Korea in the first place some eight years ago Marco replies, "No particular reason".

"I first came here to study Korean, and found the place very interesting. Then I started modeling with a friend (as a side job)", he explained.

"Just the fact that there were so many Koreans (in one place) fascinated me. Some things were of course harder to adjust to, for example the unfamiliar food like cheongguk-jang (fermented soy-bean paste) and tteokbeokki (ricecake in hot pepper sauce). Now my favorite Korean dish is doenjang-jjigae (soy bean paste soup)", he said.

But behind his cheerful and happy-go-lucky demeanor, Marco has also had his share of confusion and difficulties.

"When I was young, as I was born in Argentina, I used to think that Argentina was my home country. But whenever I looked at myself, looking clearly different (from the locals), I sometimes felt like I was an outsider".

He thought once he came to Korea, he would be treated the same as other Koreans.

"But that was not the case, and I also felt like an outsider here".

Although it was hard at first trying to figure out where he truly belonged, Marco now has decided that where you live at that moment is where you belong.

"If I decide I will root myself down here that is where I belong. And it is my plan to stay in Korea for good".

Marco currently plays the part of an unruly husband to a more headstrong wife. The two constantly clash due to cultural differences and Marco's unfettered lifestyle.

In one of the episodes, Marco rattles Son by asking her to allow him to club-hop during weekends with his friends, and refusing to let her help him study Korean.

In another, Marco tries to impress Son by jumping into Cheonggyecheon in cold weather and showering her with romantic gifts. Despite his uncanny - sometimes exhausting - tendency to get his way, he ends up charming his way into Son's heart by making her break out in dumbfounded laughs.

"The staff (of the TV production) suffers because I tend to be unpredictable while filming the show, going from one place to another without notice. Editing people have it the hardest", he said.

His career has included a small part in "Make It Big" in 2002, and a supporting role in "Love Exposure" (2007) alongside actress Lee Mi-yeon.

His goal right now is to become a full-fledged actor, and star in a romantic-comedy.

"To be honest, what I really want to do is acting. I know I have to speak better. I am taking acting and pronunciation classes for that", he said, adding that at the moment he mainly gets love calls from entertainment shows.

Admitting that he sometimes appears to be too rash and immature, he says that what we see is not all there is.

Marco said that he does not feel any prejudice working as a gyopo (overseas Korean) in Korea but that he tries extra hard to have better manners.

"As long as you act respectful, people will be nice to you".

With him already featured in a number of TV commercials such as SK Telecom and Dunkin Donuts, and increasing exposure at various TV entertainment shows, Marco seems to be setting out well to make a name in the Korean entertainment business, "Marco style".