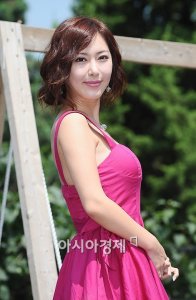 Pop stars probably could easily become actors if they try, or vice versa. However, if not to show off their versatility, changing their careers completely is seldom worth the effort.

Shoo, former member of now-disbanded super girl trio S.E.S., however, is certainly among the few who have taken the transition earnestly and done it successfully. Playing the main role of Shelly in the recent musical "Bat Boy", Shoo, whose real name is Yoo Soo-young, said that she didn't want to be a singer again. "I don't miss the times when I was the member of the group either", she said.

It's not, according to Shoo, that she is on bad terms with Eugene (Eugene) and Bada, two other members of the band. In fact, they are all close enough to come to see Yoo's show last Friday, despite their busy schedules.

"I just like acting. More than anything else, I love the feeling of being united with the audience during the show, which lasts much longer than when I sing", Yoo explained. Besides "Bat Boy", she has been offered to star in many other musicals and movies, but rejected them because she didn't wanted to be seen as just one of many singers who try to act as well, taking advantage of their popularity as singers. "I think I can be endowed with the actor's title only after proving my talents as one in many different shows", Yoo said. "I want to be a real actor, and I want to be one for a long time".

Apart from her definition of an actor, though, Yoo started acting from when she still was an S.E.S. girl. Born and raised in Japan, Yoo made her debut as an actress in Japan back in 2001, when she played Korean-Japanese Mariko in the play "Two Souls", who falls in love with a high school baseball star who was played by Yoshihiko Inohara of Japanese idol group V6.

Sold out through the entire six-city tour including Tokyo and Osaka, selling over 110,000 tickets, the play revolved around the friendship between a Japanese and a Korean resident in Japan, conflicts from prejudice, star-crossed love, and hopes for the future.

The show's success gave her the chance to act in the Japanese version of "Bat Boy", earlier this year, which turned out to be a great success as well. Having played the same role in two different languages, Yoo pointed out that the difference is greater than the language difference.

"I've found Korean audiences more reactive in good meaning of course. But the hardware of the show, such as lighting and sound, those in Japan are a little more actor-friendly", Yoo said cautiously. "I also felt that Korean musical actors are somewhat obsessed with following 'musical drama type of singing', while in Japan, actors feel free to show their unique personalities".

The black comedy about the story of a half-bat, half-boy is differently shown in Japan and Korea, according to her, in that the Japanese version was more like a heavy and serious social drama, while the Korean one is a more witty black comedy, just like the original Off-Broadway version.

While the Korean rendition of the show runs until Sep.11 at Seensee Musical Theater in Daehangno, downtown Seoul, Ock Joo-hyun, member of another popular girl group FiN.K.L., the long standing rival of S.E.S. in late '90s, will also start performing the title role in Disney's musical "Aida" for eight months from Aug 27.

Yoo doesn't seem to care much about it.

"They are like two different genres of show. 'Aida' is a mainstream blockbuster show, while 'Bat Boy' is an experimental black comedy for a small theater", Yoo said. "Besides, the two shows are all staged by Seensee Musical Company. I wish Ock's show will also be successful".

With its preview performances ended last week, Yoo's "Bat Boy" is continuing to sell out tickets. "It's not as spectacular as 'Aida', but a wonderful, story-oriented musical", Yoo said.

When asked about the ideal type of man, she said that it was a man with lots of different charm. "I will marry someday. There can't be any doubt about it. But for now, I really have no time to think about it".

She is only 24, but her manner of avoiding an embarrassing moment during the interview was as smooth as any other super star. "I hope I could play Roxy Heart in 'Chicago' someday", said Yoo, smiling a little bashfully.