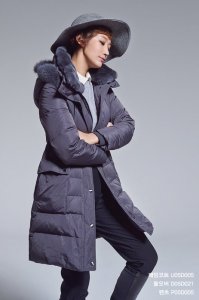 Staying in the fashion business for more than 10 years is a feat in itself. Starting as a model, albeit a "super" one, and then expanding that career to incorporate being a fashion designer as well as a TV actress, with a 9-year-old daughter and another one on the way, can be only described as the job of a superwoman.

Byun Jung-soo, however, seems to juggle this quite effortlessly, morphing into one job to another like a chameleon. "I am not the kind of person who is set on a single goal. For me, acting, modeling and designing are equally important", she told The Korea Herald before the second presentation of her Ellahoya line, which was held Wednesday.

The easy-to-coordinate line was launched a year ago. She has been known for her exquisite taste and seemingly insatiable appetite for fashion.

"For me, acting, modeling and designing are equally important", Byun Jung-soo says.
"As a model and as someone crazy about fashion, I have worn countless clothes. Since I debuted as a TV actress, I have had more chances to be different characters", said Byeon. "And I felt there weren't that many choices for women like me. Young moms who wanted clothes that would make them look cool, but at the same time, comfortable". So Ellahoya was born, sold exclusively on the Hyundai home-shopping channel, for which she personally appears to advise the viewers how to mix and match.

Encouraged by the enthusiastic response, she decided to add the "Black Label" range to Ellahoya, as it offers higher-end items.

"With Ellahoya, I wanted to offer quality clothing with decent fabrics and superb tailoring. And this 'Black Label' is taking it one step farther. It is not necessarily about selling more expensive clothes but rather exclusive merchandise, made in less quantity with more attention to details. These are items you can't find anywhere else", explained Byeon.

When asked to come up with a short-list of must-have items for this fall/winter season, she said, "You might as well have every single item from the line", flashing her million-dollar smile.

If you are planning to update your wardrobe with only a couple of handpicked items, Byeon recommends an alpaca coat and a cashmere hoodie. "These are versatile, as are most of my designs, and lightweight, which makes them ideal for this season's layered look. And I can assure you that they both look great on anybody".

Coming from a veteran model whose long limbs are not affected by her 7-month pregnancy, it is hard not to doubt her definition of any "body".

"Don't be afraid to try different looks, as pulling off a look is not so much about your body shape but more about your confidence", she emphasized.

"Take a look at this jersey wrap dress, which many women dread to wear since they are worried it might make them look fatter. But its graphic print takes the eyes away from the flab and the sash, to be wrapped around the waist and twisted into a ribbon in the front, covers up the middle and makes them appear flat", added Byeon, who majored in textile design in college before becoming a model.

She admits that she was not so sure when she first set out as a designer, wondering who her actual customers would be and what they would want. But after a year, she had a clearer vision for her line.

"I do have my type-A moments when the samples come out totally different from what I had in mind. That drives me insane. But most of the time, I just enjoy what I am doing", said Byeon, who counts fashion designers Stella McCartney and Michael Kors as her role models.

"She (McCartney) seems to be free-spirited, unbound by her surroundings or her success. Her collaboration with H&M showed me that good design does not have to be expensive. And Kors! Seeing him on the reality show 'Project Runway', I admire him for having his own philosophy as a designer", she said, adding that "someday, I might be able to share what I have learned and experienced with more people, to influence and make changes in their lives".