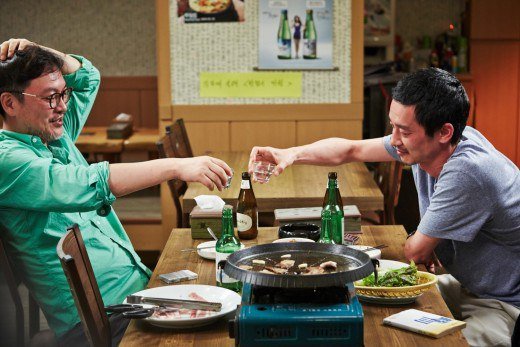 "Hill of Freedom" stills of Ryo Kase and Kim Eui-sung being drunk were released.

Japanese Mori (Ryo Kase) comes to Korea in search of the woman he loves Kwon (Seo Young-hwa) and stays in a guest house near her house. He meets Sang-won (Kim Eui-sung), a truthful and warm man. Sang-won takes Mori to look around once and drinks and eats with him twice.

While drinking, Mori says, "I want to see her" and tells Do Soo-cheon, a foreigner who drinks with them, that he envies him for living with his wife.

When Sang-won asks if he should find that woman, Mori says, "I don't care if I see her or not. The important thing is that I am looking for her and thinking about her".

This drunken but honest scene of Mori's is the highlight of this movie. Sometimes actors drink the real stuff to film a scene but Ryo Kase is a lightweight and couldn't avoid becoming slightly drunk.

His face became hotter and he was tired but Ryo Kase showed amazing concentration to make this scene happen. Kim Eui-sung has had experience drinking and filming in other movies.

The drinking scene was successfully filmed and the audience are looking forward to it. Director Hong Sang-soo has always been known for his drunken scenes in every movie he does.

"Hill of Freedom" is being released on the 4th of September.

""Hill of Freedom" Ryo Kase and Kim Eui-sung"
by HanCinema is licensed under a Creative Commons Attribution-Share Alike 3.0 Unported License.
Based on a work from this source