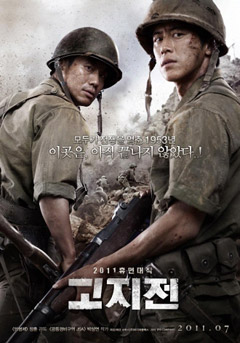 "The Front Line" has been nominated for 11 categories including Best Film at the 32nd Blue Dragon Film Awards, a leading annual awards ceremony organized by the Sports Chosun that focuses on new blockbusters.

Directed by Jang Hoon, the movie revolves around a final battle fought in the early stages of the 1950-53 Korean War after the 1951 ceasefire is announced, showing how soldiers can lose their humanity in the insanity of war. It stars Shin Ha-kyun and Go Soo, among others.

"Arrow, The Ultimate Weapon", starring Park Hae-il as the best archer in the Chosun Dynasty and his odyssey to rescue his sister, picked up nominations for 10 categories, including Best Film and Best Director, while "Sunny - 2010" has a fighting chance in eight categories and "Silenced" seven, including Best Leading Actress for Jung Yu-mi.

This year's Blue Dragon Film Awards will be held at Kyunghee University in Seoul on Nov. 25. A total of 22 films will compete in 15 categories.

"Historic War Drama Tops Nominations at Blue Dragon Awards "
by HanCinema is licensed under a Creative Commons Attribution-Share Alike 3.0 Unported License.
Based on a work from this source