History of Hondgdae in 'Street H' 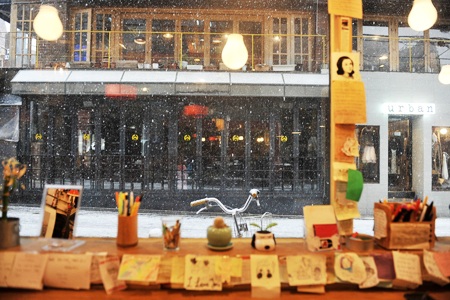 The Hongdae area is full of unique cafes, shops, clubs and artists' studios. Street H explores the region with the viewpoint of a resident./ Korea Times photo by Shim Hyun-chul

Street H is a local magazine made by the creative younger generation thriving in Hongdae and for those that congregate in Hongdae.

Hongdae is an abbreviation of Hongik University (Hongik Daehakgyo) in Korean, and generally refers to the area of Seogyo-dong, a hub for young artists and underground culture in Seoul.

The neighborhood overflows with unique cafes, restaurants, shops and clubs along with artists' studios, cultural spaces and festivals year-round. Packed with people on weekends the district can be thumping well past dawn the next day. Revelers may abound but the real Hongdae people and those involved with Street H know it's not just about clubbing or decadence. 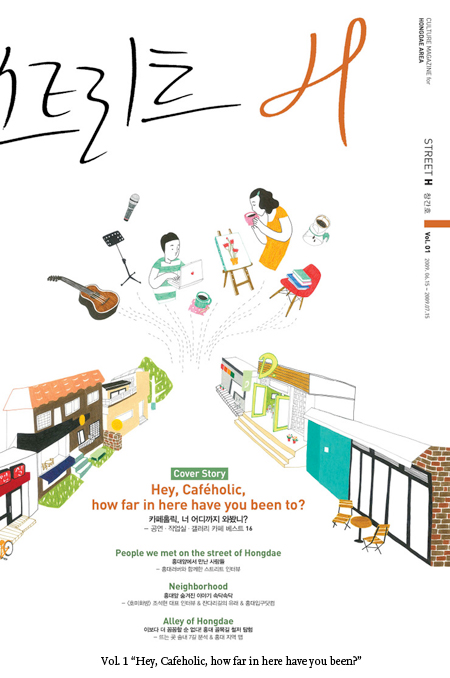 The magazine explores a variety of themes infused in the area. In fact, anything about Hongdae could be a topic for Street H _ small bookshops, a bike-riding map, real estate prices, cafes with terraces, humanities studies, the death of Club Day and the streets of Hongdae seen from the second floor.

Street H was established in June 2009 and last month released its 32nd volume featuring Hongdae people with particular jobs such as a tattooist, interdisciplinary artist and creature creator.

The free magazine is published by a man who lived in the area for around 30 years. 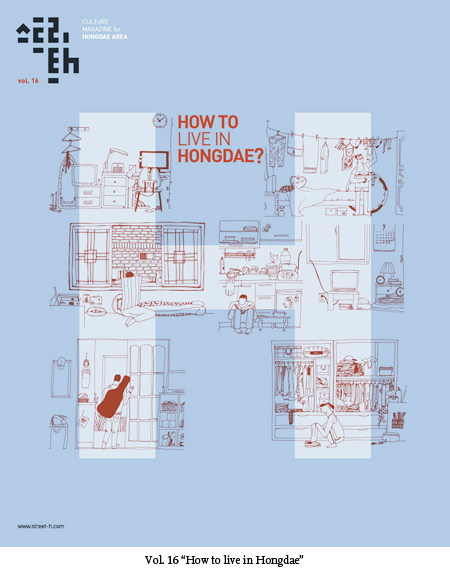 "There are many interesting things happening in this neighborhood and I thought I would do something interesting about the area", said Jang Sung-hwan, publisher and Street H and CEO of Design Studio 203. As expected he earned his bachelor's degree in visual design and master's degree in industrial design at Hongik University.

Local magazines in New York City such as L Magazine and Village Voice inspired Jang to do something similar. "I have worked in the magazine and publishing industry for some 20 years and I decided to do what I can do best _ make a magazine about the Hongdae area".

Two-thousand copies of Street H are distributed across Hongdae area every month through selected cafes, book stores and tourist information centers. The magazine, including back numbers, is available through its website at www.street-h.com and electronic magazine platforms such as Moazine and MegaVista as well. 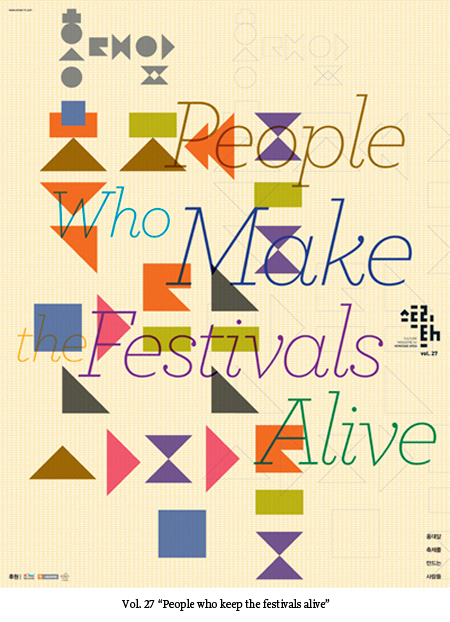 "The magazine is quite popular in the area and it is all gone within a week after distribution, sometimes faster", he said. "We might increase the circulation a bit as more people want to read Street H, but we won't print 10,000 copies of it because it would be too much for a local paper focused on just the Hongdae area".

Currently, Street H is written by guest reporters and a talented group of contributing writers. It is not sponsored or print advertisements. Though they are not paid, they write about every part of the neighborhood in an affectionate way. "The difference comes from the fact that we 'stay' here. Other reporters come here to write the story", Jang said.

Each volume of Street H has a map of Hongdae area marked with cafes, clubs and other cultural spaces. Jang believes the map contains more than just location information. 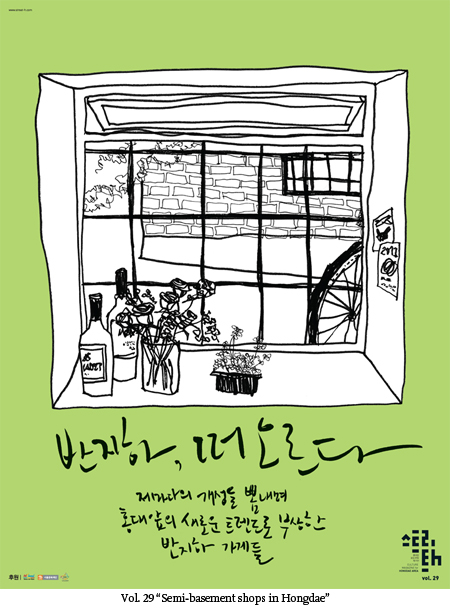 "I think the map is about existence information which bears information about what is here now and what is gone", Jang said. "When the maps are accumulated and layered, it is history".

Jang said the map has changed a lot since the beginning in 2009. "At first, our map only covered the Seogyo-dong area in front of Hongik University. Now it is expanded to include Sangsu-dong, Hapjeong-dong and Donggyo-dong", he said. "When we had put the 24 maps together at the magazine's 2nd anniversary exhibition, it showed the changes of the neighborhood at a glance".

Street H is a magazine that cares about people. The stories "cover every inch of Hongdae _ the people who make everything here and those who come to participate in the culture", he said. "We are interested in what people are doing and why". 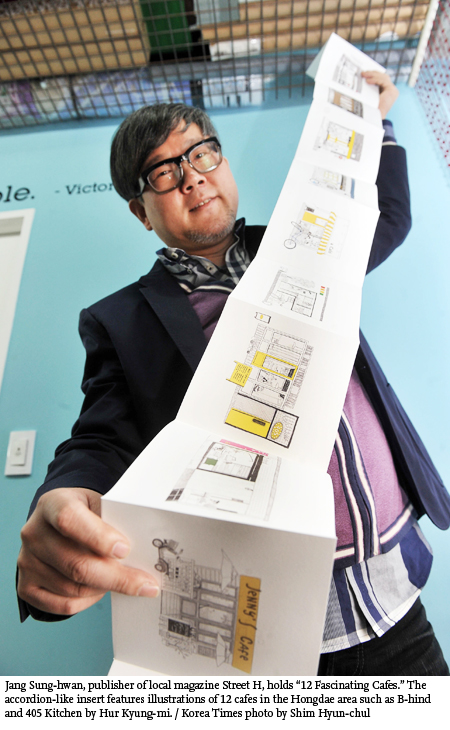 However, the monthly is not all about hip youngsters in the area. It also interviews older people who are longtime residents, art supply store managers and other mom-and-pop store owners.

"We try to balance the magazine by paying attention to social issues happening in the area such as Dooriban, a noodle restaurant that fought hard against a redevelopment project", he said.

The cover of the January 2012 issue was an illustration depicting the scenery at a three-way intersection showing the yellow-sign of Record Forum and a house with a red roof.

"In 2012, we will depict the year of Hongdae through illustrations", the publisher said. "I know it is impossible to document everything about the Hongdae area, but we do want to record as much as possible, especially meaningful places such as the Richemont Bakery".

Richemont, a bakery that opened in front of Hongik University in 1984, closed on Jan. 31 due to the termination of the rental contract with the landlord. The place will reopen as a franchise coffee shop run by a conglomerate in February.

The closure of the cherished bakery did not go unnoticed by local merchants. "Though the physical place is gone, the bakery will remain in our memories. I think that is one of the reasons why we document the Hongdae area", he said.

Street H is expanding communication with readers and local residents through Twitter (@_streeth) as well. "When we asked for recommendations for next month's cover illustration, we received a lot of interesting feedback. One of them said he was born at a house now turned into a restaurant. The history of the area is made up of such developments", Jang said.

Street H published "12 Fascinating Cafes", the first of its accordion book series featuring illustrations of 12 cafes in the Hongdae area by Hur Kyung-mi, in January. The 15 centimeter by 15 centimeter book expands to 1.8 meters when fully unfolded. The 12 cafes in the book include local fixtures B-hind, 405 Kitchen, Jenny's Cafe, D'avant, Cafe Sukara, Coffee Lab and Mobssie.

"We chose cafes that lasted for at least three years and are expected to stay longer", Jang said. "We aim to capture the nostalgia of the district in the book".

Jang plans to continue the accordion book series with various ways to remember the alley ways in Hongdae area. "I could collaborate with artists who take photos of life in the streets or make stamps of buildings", he said. "There is no souvenir of Hongdae which people can take home and remember this area booming with creativity. The book is a result of a designer's answer to this dilemma".

It is a part of Street H's bigger plan to create a cultural hub in the area.

"It's tentatively named Street H Spot. The place is going to be a magnet for tourists where they can have a cup of coffee or a bowl of warm vegetable soup, share information on the Hongdae area and get some souvenirs", he said. "The accordion book is like a part of Hongdae you can take home and cherish".

"History of Hondgdae in 'Street H' "
by HanCinema is licensed under a Creative Commons Attribution-Share Alike 3.0 Unported License.
Based on a work from this source