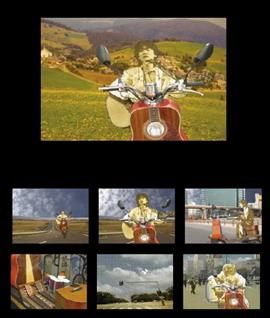 A special homage will be paid to Kim Kwang-seok, the late guitarist and vocalist who also majored in sculpture, at Gallery Flower located in front of Hongik University from April 7 to 21.

The exhibit, entitled 'Kim Kwang-seok Report', will display works by artist Jung Hye-kyung, including a motorcycle made with a guitar and stainless steel. The exhibit will also screen a documentary featuring interviews with various celebrity fans of the late musician, including TV personality Kim Je-jong.

Jung also created a short animated film featuring the late Kim travelling the world on the motorcycle she created. One of Kim's most popular songs, 'Thirty Something' was remixed and featured as the theme song of the short film.

Jung said she became interested in Kim Kwang-seok at a time when she was deeply interested in the subject of 'deviation'. She said she began her research on the musician two years ago and pushed forward with the art project. This will be the second private exhibition for the graduate of Sunshin Women's University's Department of Sculpture.