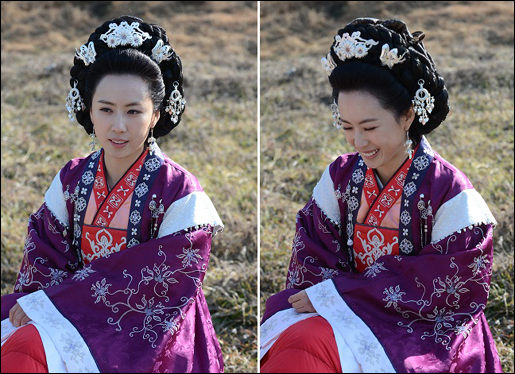 She is starring as Queen Sundeok in this drama as the step-in for Park Joo-mi who had to step down because of an accident she had while making the drama.

About her experience, Hong Eun-hee said, "I shot the scene where I saw enemies trying to kill me. I didn't think it would be this scary. It's amazing".

She said, "It's already so much into the story and I hope I can get along with the existing cast and not be awkward".

About what her husband Yu Jun-sang said, she said, "He told me to do well. I've been in a historical called, "Sangdo" but it was more fusion so it's actually my first actual historical".

Hong Eun-hee said, "Everything was a pressure; Park Joo-mi's accident and the fact that the role was changing all of a sudden. It's not something you can see everyday but it's a precious experience so I decided to do it looking at the big part".

Meanwhile, Hong Eun-hee's part of "The Great King's Dream" will start airing on the 8th.

"Hong Eun-hee's first shot of "The Great King's Dream""
by HanCinema is licensed under a Creative Commons Attribution-Share Alike 3.0 Unported License.
Based on a work from this source