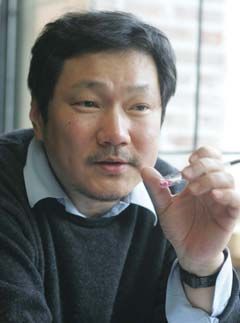 Korean director Hong Sang-soo is becoming a familiar face in the south of France. The organizing committee of the 64th Cannes Film Festival announced on Friday that Hong's latest film "The Day He Arrives" has been selected to screen in the Un Certain Regard section.

This is his seventh film invited to Cannes, the most for a Korean director. "The Power of Kangwon Province" received Un Certain Regard Special Mention in 1998, while "Virgin Stripped Bare by Her Bachelors" (2000), "Woman is the Future of Man" (2004) and "Tale of Cinema" (2005) were selected for the official competition. "Like You Know It All" was featured in the Critics' Week section in 2009, and "Ha Ha Ha" won the top prize in the Un Certain Regard section in 2010.

The Un Certain Regard section is dedicated to innovative and creative films, while the Palme d'Or, the highest prize of the festival, is awarded in the official competition.