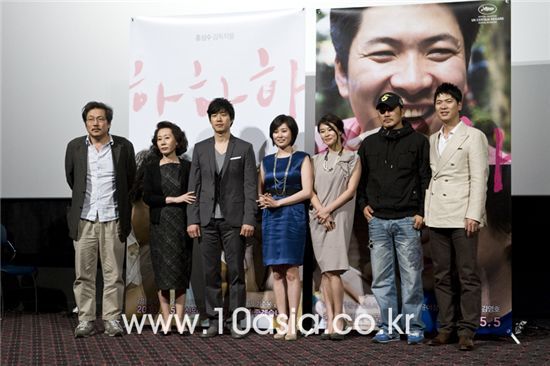 If one had to come up with a subtitle for director Hong Sang-soo's tenth film "Ha Ha Ha", it could be "Cute". The movie is guided by the memories that movie critic Joong-sik (played by Yu Jun-sang) and aspiring movie director Moon-gyeong (played by Kim Sang-kyung) have about their summer trip to Tongyeong. And just like any other film by director Hong, these men go to an unfamiliar place where they chase after women, drink, lie and talk both nonsense and of their dreams. But no matter how pathetic or loser-like they act, one cannot hate them. Hong, who had stepped up the level of jolliness detected in his work starting with "Like You Know It All", produces the biggest laugh through "Ha Ha Ha". Hong's directing skills are better than ever in that he can wrap up his story making the characters seem 'cute' despite their senseless and rubbish philosophical discussions, their extraordinary farewell scene, and the actions they take on which may cause viewers to stare in disbelief.

Just in the way that the characters in the film repeatedly tell each other that they are 'cute', they are viewed in the exact same way by the director. But the way he sees the characters is contagious to the audience. Below are excerpts from the press conference for the film "Ha Ha Ha" attended by director Hong Sang-soo, Kim Sang-kyung, Yu Jun-sang, Moon So-ri, Ye Ji-won, Youn Yuh-jung and Kim Yeong-ho.

10: The title of your film "Ha Ha Ha" is interesting.
Director Hong Sang-soo (Hong): I don't remember exactly when but right before we began filming, I was riding a taxi to Chungmuro when I saw a store sign that had two Korean characters 'ha' that were overlapping and it reminded me of 'Ha Ha Ha'. I liked it because it felt like it was emphasizing summer and it was also like the sound of laughter.

10: "Ha Ha Ha" is cheerful compared to your previous works. How did you go about starting this film because I heard there was a personal experience that became the beginning of the film?
Hong: In order to find a location to shoot the movie, I had travelled to Moongyeong and Tongyeong. And I became stimulated by what I saw at Tongyeong so that's when I decided on the location, and then the structure of the film. And I think it ended up that way because the movie talks about how two people travel to the same place but it was important that the film take on the artificial structure that it only talks about the fun things. 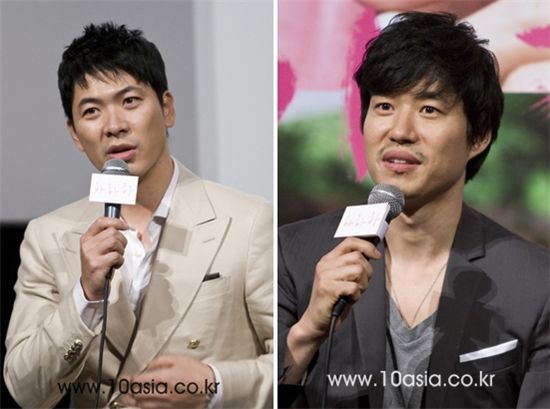 10: What is ironical is that the still image of Moon-gyeong and Joong-sik drinking together while talking about the time they were at Moongyeong seems to give off the vibe that it's from the past instead of the present, while the scene where they reminisce about their past they were actually in Tongyeong emphasizes the present time.
Hong: We decided on making the film that way when we began doing the first edit. It's where the scene was to be divided between the present and past but it seemed that it might be better to switch them. Should I say I expressed the present like it was the past? I just felt like doing it that way.

10: You'll be going to the Cannes Film Festival for the sixth time this year with "Ha Ha Ha". You went last year for your film "Like You Know It All".
Hong: It is very effective to screen your movie at Cannes because many people come to the festival. It also helps when you shoot your next movie in someway or another. It's great for actors go to the festival to go to too. (laugh)

10: Youn Yuh-jung, you will be at Cannes for two films "The Housemaid - 2010" and "Ha Ha Ha", which is probably the first time for such a thing to happen in Korean film history.
Youn Yuh-jung (Yoon): I am happy to be going to Cannes. I had never been there for the past 60 years of my life but now I'm going for two films. It's pleasant to know that such a thing has happened after having acted for so long. (laugh)

10: The directors for both films were called 'Sang-soo'. How do they compare?
Yoon: I'm not a critic and I don't think you can compare the two because they are two very different Sang-soos. (laugh) Moon So-ri would probably know better. (laugh)
Moon So-ri (Moon): In the past, both directors had many skin-baring scenes. While one now gives me a blanket to cover up, the other still doesn't. (laugh)
Yoon: I wouldn't know. I haven't had to try it myself. (laugh)
Moon: Both Im Sang-soo and Hong Sang-soo are extremely cheerful. At least much more than director Lee Chang-dong. (laugh)
Yoon: For someone my age, it was the first time working in the style that director Hong does. There was no full script and the environment on set was poor. It was really hard filming so I lost my temper all the time. But after watching the film for the first time today, I felt that I am finally starting to act a bit well. When I saw other actors in past productions I would think, "How come that person can't act", but everyone was so good this time that I would want to try again. (laugh)

10: Kim Sang-kyung, you have already been in three of Hong's productions.
Kim Sang-kyung (Kim): Those who see director Hong's movies have different perspectives on them. People who don't like his films say they are always the same but I feel that they're different every time. I feel happy after watching "Ha Ha Ha" today. Although, of course, it was hard to shoot. (laugh) Even though I have worked with Hong several times, I have a hard time everytime. I act as if it isn't difficult when we're in shoot. As much as I know the director, it is hard to sometimes act out some of the expressions that he wants.

"Hong Sang-soo's jolliness peaks in "Ha Ha Ha" - Part 1"
by HanCinema is licensed under a Creative Commons Attribution-Share Alike 3.0 Unported License.
Based on a work from this source