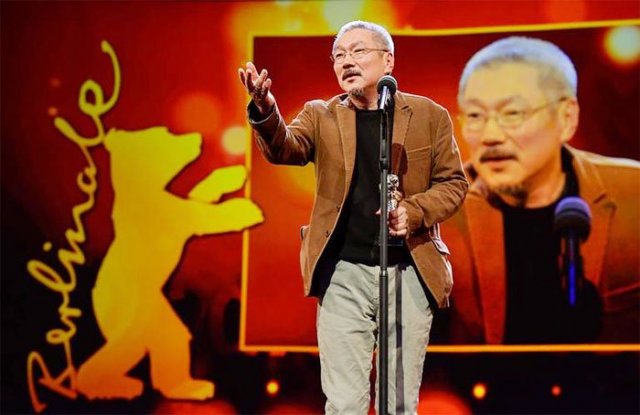 Hong Sang-soo accepts an award given for best director at the Berlin International Film Festival on Saturday. /AFP-Yonhap

Hong became the second Korean filmmaker to receive the Silver Bear award after Kim Ki-duk, who won the honor with "Samaria" in 2004.

As his name was announced, Hong hugged actress Kim Min-hee, and walked up to the stage. He thanked the jury and those involved in making the film, and asked the crowd to applaud the two starring actresses, Kim and Seo Young-hwa.

Premiered at the festival, the film is about a woman who meets three friends when her husband goes on a business trip. It stars Kim in her seventh collaboration with Hong, who deserted his wife to shack up with Kim. Hong lost a divorce suit against his wife last year, but Hong and Kim have maintained their romantic relationship and seem not to be bothered by what others say.

They were spotted wearing matching rings when they appeared at a press event for the film's screening there on Feb. 25. 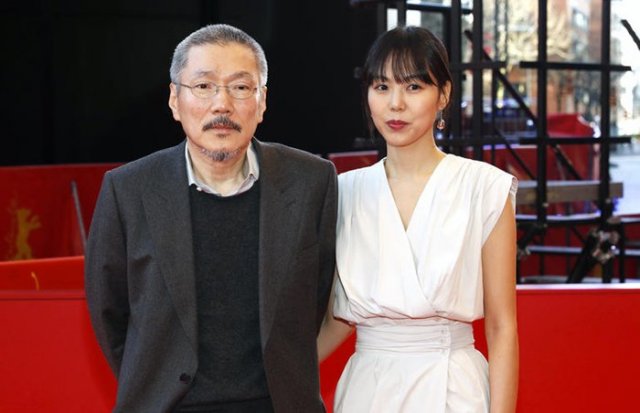 Director Hong Sang-soo and actress Kim Min-hee pose as they arrive for the screening of the movie "The Woman Who Ran" during the Berlin International Film Festival in Berlin, Germany on Feb. 25. /Reuters-Yonhap

Hong said at a press event after winning the award, "I try to avoid the temptation to make films with big intentions. Instead, I try to focus on little details, on things that are sensitive rather than strong".

The highest prize, the Golden Bear for best film, went to Iranian director Mohammad Rasoulof's "There Is No Evil". However, Rasoulof was unable to attend the awards ceremony due to a travel ban imposed by Iranian authorities.

No Korean filmmaker has ever won the top honor in Berlin, though Koreans have conquered the two other prestigious film festivals in Europe, with Bong Joon-ho's black comedy "Parasite" winning the Palme d'Or at Cannes in 2019 and "Pieta" by Kim Ki-duk winning the Golden Lion at Venice in 2012.

"Hong Sang-soo Wins Silver Bear at Berlinale"
by HanCinema is licensed under a Creative Commons Attribution-Share Alike 3.0 Unported License.
Based on a work from this source