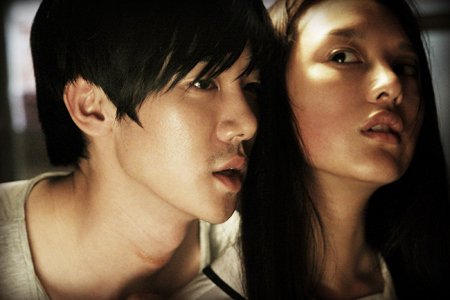 A scene from "Horror Stories", opening film at PiFan 2012 / Courtesy of PiFan

Horror films used to be the staple of the summer cinema season, with local fans rushing to theaters for a chilling experience. But that trend has waned considerably.

As the curtain rises on the 16th Puchon International Fantastic Film Festival (PiFan) today, the genre takes the limelight, thanks to the opener "Horror Stories".

The two-hour omnibus film brings together shorts by a handful of Korean directors including Jeong Beom-sik, Im Dae-woong, Hong Ji-young, and twin brothers Kim Gok and Kim Sun. The four episodes were combined by Min Gyoo-dong (fresh off of the commercial success of "Everything about my Wife"), who bridged them with a story about a kidnapper and his young female victim.

The opening ceremony will take place tonight at 7 p.m. in the Bucheon Gymnasium, kicking off 10 days of 230 films from 47 countries. The event will be led by actress Jang Seo-hee and singer and first-generation teen idol Jang Woo-hyuk.

The festival closes on July 29 with the new Takashi Miike film "For Love's Sake", based on a '70s manga series. It will be the feature's Asian premiere.

Indonesian director UPI's "Belenggu", about a man haunted by images of murder is making its world premiere here. It will be the first time for the rest of the 12 selected films to be screened in the country, and most of them making their first screening on this continent.

The retrospectives bring the spotlight to 1970s Korean comedy and feature the works of late British director Ken Russell. On the local side, films such as Shim Wu-seob's "A Man and a Gisaeng" and Lee Hyung-pyo's "Cheeky Man" are comic responses to a lengthy authoritarian rule under Park Chong-hee. For Russell, who during his life attracted much criticism for his controversial subject matter and flamboyant style, his Oscar winner "Women in Love" (1969) and three other films will be screened during the festival week.

PiFan had its first edition in 1997 and has since established itself as one of Asia's most important genre fests. It experienced a major hiccup in 2005 when directors boycotted the event to protest then Bucheon Mayor Hong Geon-pyo's meddling in the programming but recovered from the controversy nearly unscathed.

"Horror takes stage as PiFan opens"
by HanCinema is licensed under a Creative Commons Attribution-Share Alike 3.0 Unported License.
Based on a work from this source