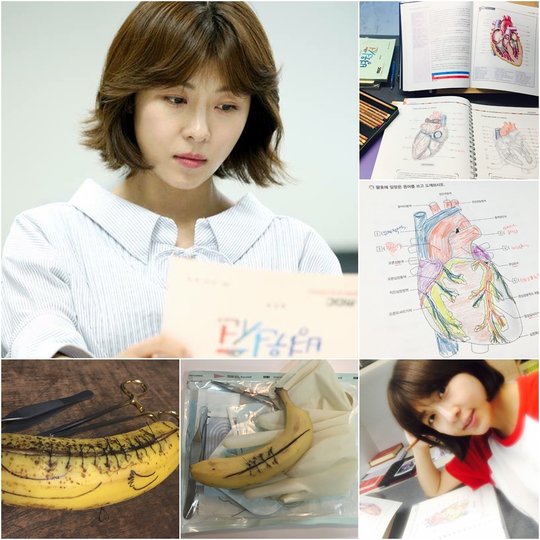 Ha Ji-won revealed pictures of her preparation for her first role as a doctor.

She takes on the role of Song Eun-jae in the new MBC drama "Hospital Ship". Ha Ji-won has been preparing for months to completely turn into Song Eun-jae, a surgeon.

Pictures that Ha Ji-won released are preparations that she's been making for the role. She bought surgical books and has been drawing the human organ one by one and naming them. She's colored them and has been trying to memorize their names and functions. She's also practiced sealing wounds on a banana.

Ha Ji-won has also been watching videos related to surgery and even documentaries.

Ha Ji-won claims, "I want to be a doctor that even the viewers can trust. This is the first time I'm playing the role of a doctor and I will try hard".

"Hospital Ship" is a human medical drama about doctors who go on voluntary work to treat patients in an island village. The drama begins on the 30th.

""Hospital Ship" Ha Ji-won's first doctor role, banana autopsy"
by HanCinema is licensed under a Creative Commons Attribution-Share Alike 3.0 Unported License.
Based on a work from this source