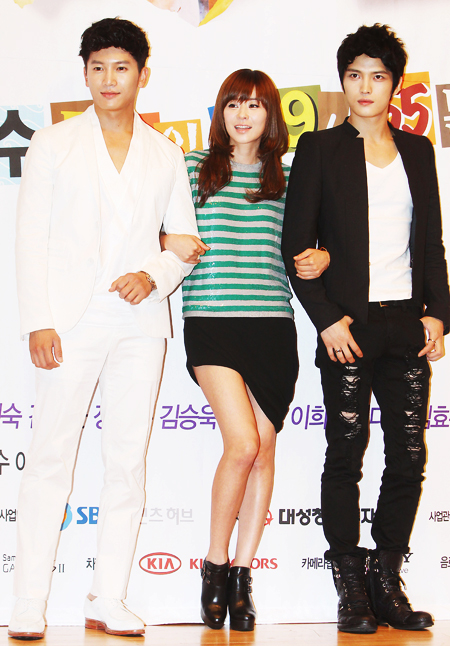 From left, actors Ji Sung, Choi Kang-hee and Kim Je-jung pose for photographers during a press conference held last week to introduce the SBS drama "Protect the Boss" at the SBS headquarters in Seoul. / Yonhap

The youth unemployment crisis is again covered on the small screen, this time with a romantic twist featuring unique characters in the new SBS drama "Protect the Boss", starting Wednesday.

The drama is a familiar romantic comedy as a rich "chaebol" heir falls in love with an ordinary woman.

Cha Ji-heon, son of DN Group president and protagonist of the new soap opera, is unlike other cold-hearted, haughty characters such as Kim Ju-won of "Secret Garden" and Hyeon Gi-jun of "Lie to Me". Cha is often scolded by his father for poor work performances and is portrayed as a good-for-nothing for the company.

Director Son Jung-hyun said he started wondering what would happen if a third-generation conglomerate owner and an ordinary "880,000-won generation" person worked together without knowing each others' background.

"He might seem perfect ― heir of a conglomerate family who has everything he wants", Ji said at a press conference for the drama last week. "However, he lives inside a small world of his own. He was deeply wounded when his brother died".

Eun-seol's interview revealed at the preview might strike a chord with many job seekers. The interviewees didn't even ask her a question and just told her that other companies would suit her better. She desperately prays for a job and finally gets one. However, things get even more complicated as she is appointed as a personal assistant to the clumsy boss Ji-heon.

Kim Kim Jae-joong Jaejoong of JYJ will play Cha Mu-won, Ji-heon's cousin vying for ownership of the company. Kim starred in the 2009 movie "Postman to Heaven" and Japanese drama "Sunao ni Narenakute" in 2010, but "Protect the Boss" is his Korean drama debut.
Kim's character Mu-won is a model boss, who is capable, has manners and knows the art of living.

"Frankly speaking, I feel pressured as JYJ members Jun-su and Yu-chun are successful in musical and dramas respectively. However, my enthusiasm exceeds the burden and other actors in the drama helped me a lot", Kim said.

Actress Wang Ji-hye plays Seo Na-yun, the perfectionist lawyer at Cha's company. She is also a daughter of the conglomerate family.

"She is the perfect woman, but could fall apart at an unexpected event such as bumping in to Eun-seol", Wang said. "Seo has humane charm behind the appearance of a perfectionist".

Veteran actors will support the love and trouble of young actors. Park Young-gyu, known for his acting in sitcoms, returns to the small screen after some six years to play the hot-tempered president of DN Group and father of Ji-heon. He will pepper the drama by portraying a conglomerate owner who behaves as he pleases.

"Protect the Boss" will be broadcast on Wednesdays and Thursdays on SBS, starting today.

"Hot-blooded secretary meets clumsy boss in new SBS drama"
by HanCinema is licensed under a Creative Commons Attribution-Share Alike 3.0 Unported License.
Based on a work from this source