Hot lovecalls toward Cho Seung-woo, Eric, Jo In-sung, who will be discharged from the military services soon 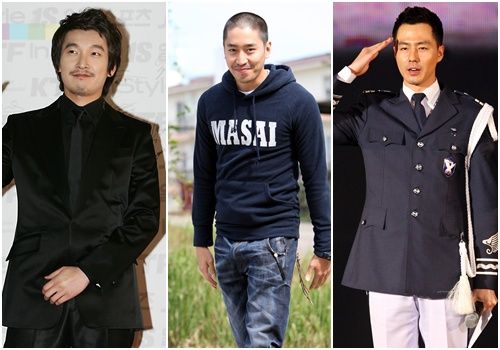 Jo In-sung, Cho Seung-woo and Eric Mun, who will be discharged soon, are getting a lot of lovecalls from the film industry.

Cho Seung-woo will be discharged on the 23th and Eric Mun on the 30th. Cho Seung-woo was in 'Whistle Acting Group' which was the part of the police department, and Eric worked as a public service worker. Since the Korean film industry was low on actors in their 30's, they were Chungmuro's most wanted.

There are also lovecalls from entertainment companies. Cho Seung-woo will be in musical 'Dr. Jekyll & Mr. Hyde' and will appear in another movie soon. Many scenarios have been sent to Cho Seung-woo even 6 months before his discharge. Actually, there were few films for which production companies said they will be waiting for Cho Seung-woo's discharge.

Eric Mun also got several requests for movies and dramas. He seriously considered appearing in "Love Song - Drama" after Park Yong-ha's death, but some facts made him decide not to take part in this drama. Eric Mun gets lovecalls for a number of thriller movies and other movies, too.

Jo In-sung is Chungmuro's most wanted actor. There are many rumors around him that he will appear in certain films, starting with director Yoo Ha's and a 10M dollars blockbuster. This shows how much people are waiting for Jo In-sung.

"Hot lovecalls toward Cho Seung-woo, Eric, Jo In-sung, who will be discharged from the military services soon"
by HanCinema is licensed under a Creative Commons Attribution-Share Alike 3.0 Unported License.
Based on a work from this source