Hottest May Temperatures in 85 Years 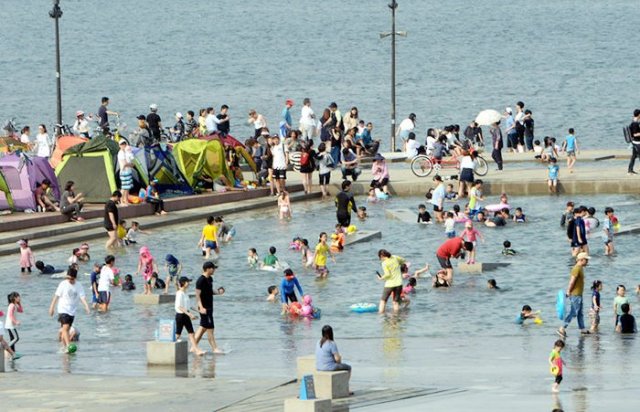 People crowd a fountain at the Han River Park in Yeouido, Seoul on Wednesday. /Newsis

The mercury soared to 30.2 degrees Celsius in Seoul on Wednesday, the hottest for the month of May in 85 years.

Scorching sunlight prompted ozone alerts throughout the day in many parts of the capital.

The weather is finally expected to cool on Friday. The Korea Meteorological Administration said rain showers are expected throughout the nation and the daytime high will drop to 27 degrees in Seoul and to the mid-20s in other parts.

Temperatures in Seoul will fall to a more seasonal 20 degrees on Saturday.

But just as the heat wave eases, air pollution is expected to increase, with northwesterly winds from China on Friday afternoon intensifying the concentration of fine dust particles throughout Korea.

"Hottest May Temperatures in 85 Years"
by HanCinema is licensed under a Creative Commons Attribution-Share Alike 3.0 Unported License.
Based on a work from this source