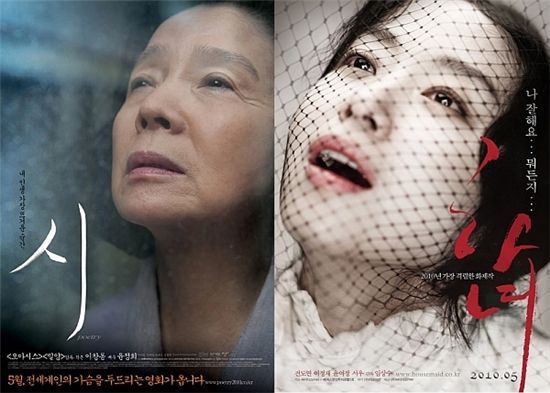 Korean films "The Housemaid - 2010" and "Poetry" are receiving heaps of attention from foreign movie buyers at the 63rd Cannes Film Festival, according to their sales executives on Wednesday (France time).

Officials in charge of overseas sales for the two pics explained that many foreign distributors are interested in buying "The Housemaid - 2010" and "Poetry" and some are even close to signing contracts.

"The film festival hasn't started yet so we haven't yet exchanged offers in detail", a source related to "The Housemaid - 2010" was quoted as saying. "But we are expecting to receive many more offers after the screening".

A representative for "Poetry" also said that he predicts a number of overseas sales offers to come their way since it was helmed by noted filmmaker Lee Chang-dong.

"Poetry", which will be released in France in August, stars veteran Korean actress Yoon Jung-hee as an elderly woman who learns how to write her own poems while fighting Alzheimer's.

The directors and lead actors for the two pics, both in competition this year, are reportedly getting interview requests from numerous foreign media outlets.

The film festival will run from May 12 thru 23.