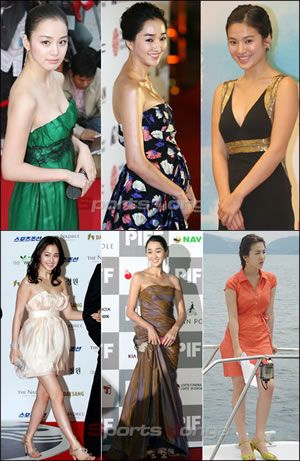 Not only stars become best friends to each other. A stylist maintains much closer relationship to a star than their manager and is solely responsible for their management. Therefore they are an inseparable assistance and a strong supporter and a best friend.

If a certain star made a sudden escape from disgraceful "worst dress" to honourable "Best dresser" category, there must be a well-matched stylist behind them.

Actor Lee Young-ae often says that she shared "10-years-old friendship" with Ma Yong-hee, her stylist. Hereupon once can see a relationship between a star and their stylist is beyond what is shared between colleagues.

A program called "Trend Report, Feel  Season II" (directed by PD Lee Sun-young/ 11pm on Tuesday) from Mnet, investigated the inseparable relationship between a star and their stylist and analysed their fashion sense and changes in styles.

The latest fashion star, Kim Tae-hee, who had been wearing tube-top mini-dresses in recent film festivals, was helped by a top stylist, Han Hye-yoen, who had been responsible for fashion styles of many top stars including Kim Jung-eun and Rain. Thanks to her, Kim Tae-hee received praises that "Her new style had maximised Kim Tae-hee's attractiveness" and was chosen as the "best dresser" and became a new "fashionist star".

Stylist Choi Hye-ryeon , who is known as Daniel Henney's stylist succeeded in achieving an ideal proportion for Song Hye-kyo to minimise her weakness of short height, when she became her stylist. Previously Song Hye-kyo maintained old styles that acted against her young age. Stylist Choi is now emphasising a chic look in her by dressing her in mini-look using dress as well as shirts. Eventually she succeeded in putting Song Hye-kyo's name on the best dresser list.

Soo Ae, whose nickname is "Dre-Soo Ae" for being chosen as a best dresser every time she appears in official events, is getting a helping hand from Stylist Jung Yoon-ki. He is known as "Soo Ae's red carpet exclusive stylist" as well as "Korea's first male stylist ever". He is talented in maximising Soo Ae's gracefulness and elegance. Thus he is an inseparable assistance for Soo Ae. Stylist Jung Yoon-ki was also responsible for Go Hyun-jung's dress who made a comeback in 10 years with the drama "Spring Days"; and the style of Kim Hye-soo, who is the star of the Blue Dragon film festival. In particular, he often works with many female stars who are largely popular with male audiences.

"How did Kim Tae-hee  Song Hye-kyo  Soo Ae became best dressers?"
by HanCinema is licensed under a Creative Commons Attribution-Share Alike 3.0 Unported License.
Based on a work from this source