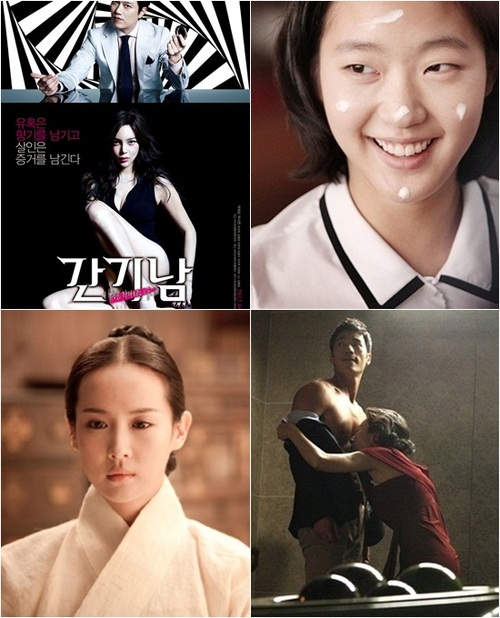 The screens are bound to become much heated up. Various movies with shocking exposure scenes are continuously being released. The message behind the movies by Jeong Ji-woo, Kim Dae-seung and Im Sang-soo are very much looked forward to as much as the exposure levels.

"The Scent" which is being released on the 11th of April is a multi genre movie which will fulfill the five sense of the audience. Based on a story about an adultery-specialist detective (Park Hee-soon) who gets involved with a murder case at a scene and is framed for it, meets a widow with extreme appeal and Park Si-yeon is compared with Sharon Stone here.

"A Muse" directed by Jeong Ji-woo which is being released on the 26th this month, is about the shocking love of a high school student and an old man in his 70s. The preview of sexuality of the high school girl has already been once restored by the judges.

While Eun-gyo the pure but provocative high school girl and Park Hae-il who has transformed into a 70-year-old man draws attention, those who have read the original are worried that the stimulating scenes might be too emphasized, discoloring the abundant contents of the movie. The desire to have something unreachable, aging and youth, and the original's depth of making one think about an artist's muse might reflect on the "Lolita Complex". However, this is one of the reasons that makes this movie so anticipating.

Im Sang-soo's "The Taste of Money" shows the shocking truth of money with 'edge'. This movie is about the desire and love and hatred of a wealthy man who is enslaved by money. The poster shows middle aged Youn Yuh-jung wanting the body of Kim Kang-woo.

Directed by Kim Dae-seung, many are looking forward to his beautiful imagery and depth of the movie. This movie is expected to bring prospect of movie in the year 2012.