How long did it take for young couples to have first kiss? 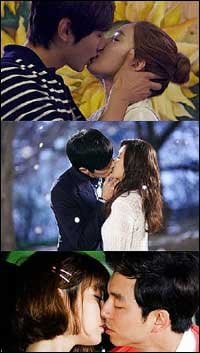 A kiss between Yoo In-na and Ji Hyun-woo in a soup opera, titled "Queen In-hyun's Man", was selected as the "best kiss on a TV drama", a survey said Thursday.

Thirty-nine percent of respondents chose the kiss between Yu and Ji as the best kiss in a soap opera, said the survey of 1,083 single men and women in their 20s and 30s. i-um, a marriage agency arranging blind dates, conducted the survey from June 7 through June 13 to mark "Kiss Day".

Trailing behind were the kisses between Kim Ha-neul and Jang Dong-gun in "A Gentleman's Dignity" with 25 percent; Han Ji-min and Park Yoo-chun in "The Rooftop Prince" with 20 percent; and Ha Ji-won and Lee Seung-gi in "The King 2 Hearts" with 16 percent.

When asked who has the "best lips" that you would like to kiss, 43 percent of female respondents picked actor Kim Soo-hyun, while 38 percent of males chose actress Lee Min-jung.

In second place were Gong Yoo (22 percent) and Su-ji, respectively.

Asked about feelings about the first kiss, 65 percent of males surveyed answered they were satisfied with the first one, whereas 57 percent of females said they felt something was missing.