How Park Min-young and Song Seung-heon avoid the sun 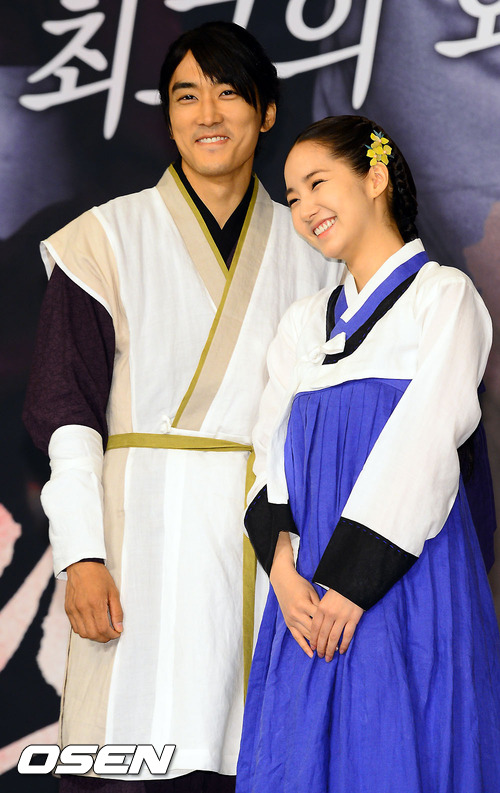 The first of the three dog's days has come at last. The steaming hot weather along with the rain and the humidity is not as bad for everyone than those actors and actresses who are currently in a historical drama.

Popular for its unique theme of 'time-slip', MBC drama "Dr. JIN" is being taken in the outdoor set of Ahn-sung in Kyeonggido. The cast has no choice but to stand under the simmering hot sun.

Park Min-young and Song Seung-heon are managing on their own. They can't wear short sleeves or shorts as they are acting in a drama of the ancient times.

Park Min-young who is taking on the role of Hong Yeong-rae, covers the sun with her hands and uses an umbrella. She can't help but be concerned about the ultra violet rays as she is an actress. A portable fan is a must.

She also puts a wet towel on her face and never lets go of her cup of ice-coffee or a drink.

Song Seung-heon or also known as Jin Hyeok in the drama, focuses in his script to get rid of the heat. He said, "There is nothing I can do to do anything about this heat outdoors. I just have to work harder".

He continued, "The Hanbok is much tougher than other clothes. I keep the top layer off when we are standing by".

"How Park Min-young and Song Seung-heon avoid the sun"
by HanCinema is licensed under a Creative Commons Attribution-Share Alike 3.0 Unported License.
Based on a work from this source