"Howling" and "Nameless Gangster" remain in the box office top spots, one and two 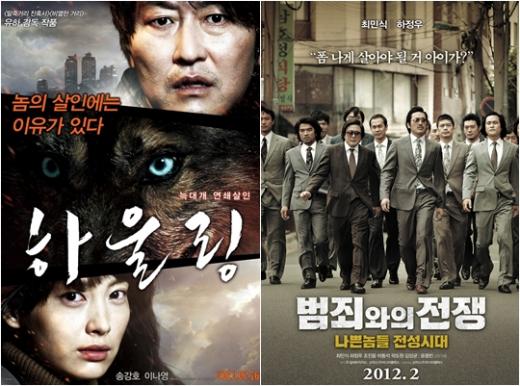 Movies "Howling" and "Nameless Gangster" are still in first and second place of the box office despite the release of new foreign movies.

According to the Korean Film Council on February 24th, "Howling" and "Nameless Gangster" gathered 58,419 and 53,933 audiences each on February 23rd.

Although "Man On Ledge", "Underworld 4: Awakening", "The Iron Lady" and "The Legend of Rabbit" were released on February 22nd/23rd, Korean movies didn't seem shaken by them.

"Dancing Queen", with Uhm Jung-hwa and Hwang Jung-min and released last month, is also in fourth place with its ever increasing number of admissions.

""Howling" and "Nameless Gangster" remain in the box office top spots, one and two"
by HanCinema is licensed under a Creative Commons Attribution-Share Alike 3.0 Unported License.
Based on a work from this source