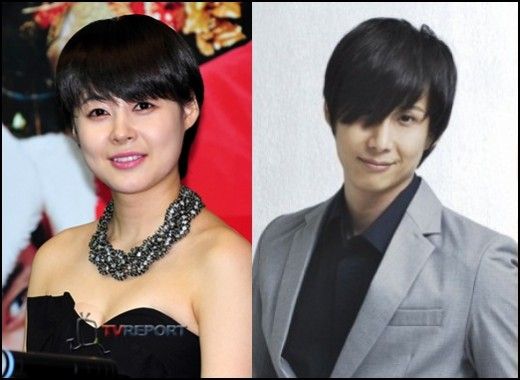 Actress Huh Yi-jae's husband-to-be, who was only known to be a 7 year older businessman at first, was found out to be the ex-member of group 'A'prism'. His name is Lee Seung-woo, and he used 'A den' for his music career.

Last year, A den, who debuted as a member of A'prism , went to take business administration training to inherit his father's business; he also runs a vocal training academy business among the study.

They first met by their friend's introduction and have been in relationship since then. They will get married at 11A.M. January 15th, 2011 in Seoul Myeongdong Catholics church.

On the other hand, Huh Yi-jae graduated from Deonggook University, Department of Theatre, and debuted with MBC 'Prince Hours'. Due to her eyes, which look alike with Kim Tae-hee's, she was frequently referred as 'Kim Tae-hee the second'. She appeared in 'Single Dad in Love', "Sunflower", 'A Dirty Carnival', 'Da Capo', '19-Nineteen', and "Girlfriends".

"Huh Yi-jae's husband-to-be is singer 'A den' of 'A.PRISM'"
by HanCinema is licensed under a Creative Commons Attribution-Share Alike 3.0 Unported License.
Based on a work from this source