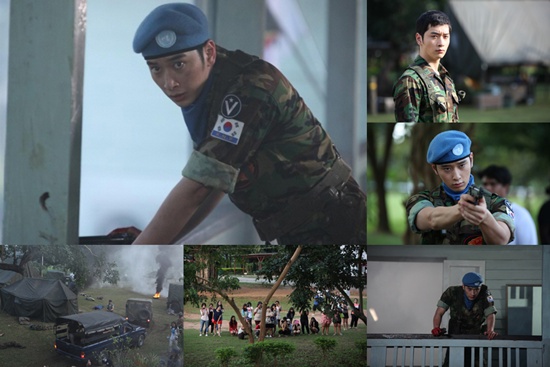 Coming back as an actor in the upcoming MBC drama "7th Grade Civil Servant", Hwang Chan-sung was seen in still cuts of the scene shot in Thailand.

The Thai location showed Kong Do-da (Hwang Chan-sung), a rookie NIS agent from the Special Forces. Hwang's sharp eyes and lean body makes one fix their eyes on him.

According to sources, hwang displayed outstanding action and was appraised by the staff. Thousands of 2PM fans were gathered on the site and proved his global popularity.

The production claims, "While rebels and Special Forces conflict against each other, this is an important scene where Do-ha goes through a mental confusion so we focused more on tension than overly big scale".

The drama "7th Grade Civil Servant" is based on the same movie about agents of the National Intelligence Service and the cast is Choi Kang-hee, Joo Won, Hwang Chan-sung and more. To be aired after "Missing You" in January 2013.

"Hwang Chan-sung becomes an agent"
by HanCinema is licensed under a Creative Commons Attribution-Share Alike 3.0 Unported License.
Based on a work from this source