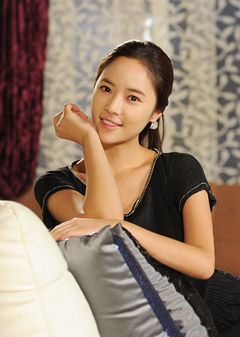 Hwang Jung-eum has seen a stunning reversal of fortunes this year. Once criticized for her unnatural and affected acting since her debut, she has blossomed into a versatile performer with the sitcom "High Kick Through The Roof", which ended early this year, and serious hour-long TV drama "Giant", which ended Tuesday.

In "Giant", she plays a woman who sacrifices everything for love. "I think as an actress I just got over the stage of embarrassment", the 25-year old admits.

"In the past, I wasn't interested in acting. I just enjoyed the attention. But since the end of last year I've been ambitious in my work. This year was very special for me, as I made up my mind to make acting my lifetime career", she says.

The SBS TV drama, set in the context of Korean politics and the construction boom of the 1970s and 80s, was a great hit amongst middle-aged and older viewers. Having already become an iconic figure among teenagers with "High Kick Through The Roof", Hwang has now become a household name to her parents' generation.

"Many middle-aged men in their 50s visited where we were shooting the soap, saying that they were fans. Gifts were mostly flowers, but I also got clothes, scarves and ear muffs too", she recalls.

What made her start to take acting seriously? "When I was shooting 'High Kick Through The Roof', director Kim Byung-wook always encouraged me, saying I was doing great and only needed to do a little bit more. Until then, I didn't have any confidence because I used to get a lot of criticism for my acting, but his words really encouraged me a lot", she says. "I started enjoying being in front of the camera, and becoming more enthusiastic about my roles so I read the script over 100 times".

"Giant" served as a great opportunity to learn more subtle techniques. "I learned a lot from veteran actors whose careers span decades. I learned how to bring out my inner emotions effectively".

"Hwang Jung-eum's Acting Blossoms"
by HanCinema is licensed under a Creative Commons Attribution-Share Alike 3.0 Unported License.
Based on a work from this source