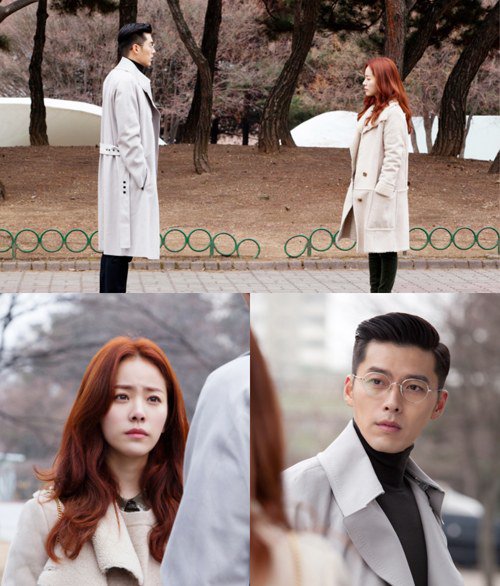 It looks like Hyun Bin is confessing his love for Han Ji-min.

With the thirteenth episode coming up on the 4th, a preview of "Hyde, Jekyll and I" was released. The stills show Han Ji-min and Hyun Bin, looking very longing.

The stills are from the thirteenth episode; Hyun Bin and Han Ji-min are standing around a lot of trees in a park. They aren't close but they aren't far. They are looking at each other and they seem very affectionate.

Hyun Bin in the picture might be the Robin that fell in love with Jang Ha-na. or he could be the bad-tempered Goo Seo-jin as he has on his trademark hairstyle and glasses. Jang Ha-na is looking at him with a complicated look in her eyes.

According to the preview, Koo Seo-jin tells Jang Ha-na, "I'm glad I met someone like you. Thank you for standing by me and I will wait for you". Will his confession change anything about Jang Ha-na's feelings for him?

The chemistry between the two can even be seen through the pictures. They are both wearing similar outfits with their hands in their pockets. The visual is like a scene from a mellow movie.

""Hyde, Jekyll and I" preview: Hyun Bin's confession for Han Ji-min"
by HanCinema is licensed under a Creative Commons Attribution-Share Alike 3.0 Unported License.
Based on a work from this source