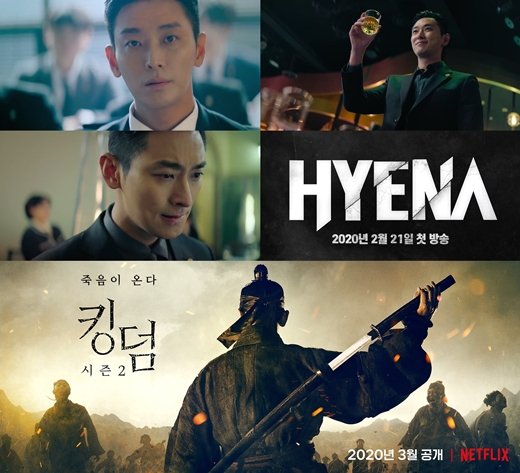 His 2019 was a strong year. He starred in the Netflix original drama "Kingdom" and MBC drama "The Item". He also won Best Actor for the film "Dark Figure of Crime".

His work continues in 2020. He takes part in the SBS Friday / Saturday drama "Hyena" and the Netflix original drama "Kingdom - Season 2".

"Hyena" is a survival drama about lawyers who represent the top 1% of high class society. Ju Ji-hoon tackles the role of Yoon Hee-jae, a 'golden spoon' in the world of lawyers who's always been the elite of elites.

"Kingdom - Season 2" is a mystery thriller about zombies in the Joseon era. The first season was well received by fans around the world for its unique character and overwhelming feast of visual beauty.

Ju Ji-hoon plays the role of Prince Yi Chang, who struggles to defeat the life-and-death crisis that began at the end of the Joseon Dynasty and spread to Dongrae.

SBS drama "Hyena" begins on the 21st of February and "Kingdom - Season 2" begins in March.

""Hyena" and "Kingdom - Season 2" Are Keeping Ju Ji-hoon Busy in 2020"
by HanCinema is licensed under a Creative Commons Attribution-Share Alike 3.0 Unported License.
Based on a work from this source