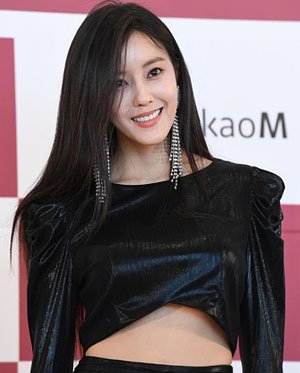 Hyomin of girl group T-ara poses at a showcase for her solo album in Seoul on Wednesday.

Hyomin, a member of girl group T-ara, released a new album on Wednesday.

The album, called "Allure", which is her third solo mini album, comes in a red cover and completes her singles trilogy which started with the yellow-covered "Mango" in September 2018 and continued with "U Um U Um" in emerald in January this year.

At a press event in Seoul on Wednesday, she said, "I think this album will be more playful and cheerful than the previous ones".

Hyomin made her debut with T-ara in July 2009, and has been the most active member in terms of pursuing a solo singing career. "Making an album is difficult, but I get a lot of help from others", she said.