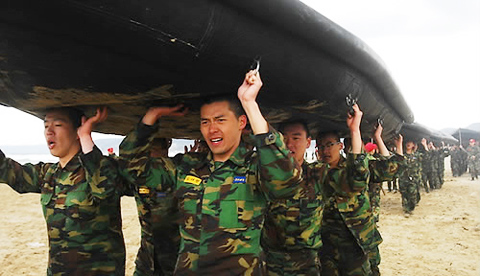 Hyun Bin is under training

Actor Hyun Bin (real name Kim Tae Pyung) finished his recruit training and has become a real member of the Marine Corps. According to the training camp of the Marine Corps on April 22, Hyun Bin had entered the training camp located in Pohang on March 7 and had participated in his recruit training along with other recruits who had enlisted in the marines at the same time for seven weeks. He completed the whole training course and will be deployed at the sixth brigade located on the Paekryongdo islands. Hyun Bin participated in a private completion ceremony held at Sangseungkwan in the training camp along with other recruits and moved to the expeditionary force on the islands located in Incheon to attend a deployment ceremony. After having a furlough for four nights and five days, he will be placed in the sixth brigade on the Paektuongdo islands. Hyun Bin had completed intensive training such as basic close-order drills, guerilla training, and basic airlifting training for the first four weeks, and continued to receive more intensive training including infiltration training, night fighting training, CBR training, night quartering, K-3 rifle drills, and IBS landing drills. 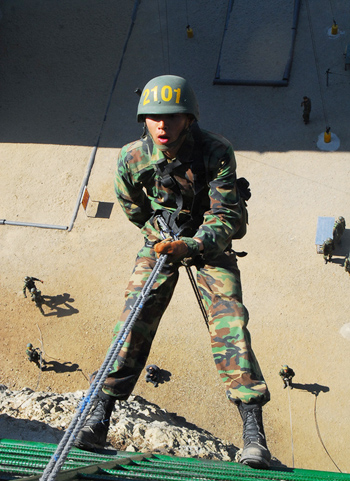 During rifle drills that were held in the fourth week, Hyun Bin had attained full marks and had been chosen as an excellent marksman. He also safely completed 30 kilometer marching training, which was the essence of the training held in the fifth week. All recruits had to march 30 kilometers in eight hours while fully armed and equipped, and Hyun Bin was able to obtain a red name tag, the symbol of the marines, by passing the marching training. A person from the training camp said, "The march is the symbol of marines' spirit and every officer, noncommissioned officer, and soldier has to pass the marching training to put their red name tag on their chest". Hyun Bin had decided to serve as a marine in the public relations office on April 8, but due to strong public opinion that he had to serve as an ordinary soldier, his position was changed to a combat trooper, and he will be deployed in the sixth brigade on the Paekryongdo islands. He will finish his military service on December 6, 2012.

"Hyun Bin Completes Marine Corps's Training Camp"
by HanCinema is licensed under a Creative Commons Attribution-Share Alike 3.0 Unported License.
Based on a work from this source