Hyun Bin emerges as Romeo of the hour 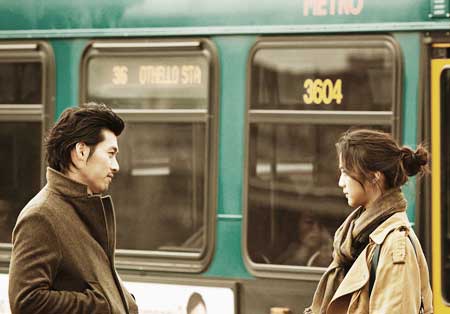 Hyun Bin speaks to reporters about "Late Autumn - 2010" (above), which has been invited to the Berlin Film Festival, in Seoul, Thursday. Another one of his films, "Come Rain Come Shine", is competing at the event. /Yonhap

Tang Wei parodied, using the little Korean she knows, the phrase made popular by "Secret Garden" ― to the delight of many fans in Seoul last week.

The Chinese actress' visit came in time for "Late Autumn - 2010", the latest film by Kim Tae-yong co-starring Hyeon. Tang, who emerged to international stardom through Ang Lee's "Lust, Caution", even kept her answers short during the press conference. "I know a lot of reporters and fans are here to hear from Hyun Bin", she said. 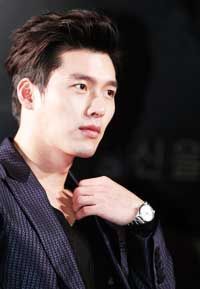 Indeed, Hyeon went from being your average pretty boy to household icon through "Secret Garden", and in addition to his newly amassed star power, the 28-year-old is emerging as a hot topic for critics.

His capacity for more artistic ends can be scrutinized through two new movies, both of which have been invited to the ongoing Berlin Film Festival.

"Late Autumn - 2010" is showing in the Berlinale's Forum section, while "Come Rain Come Shine", co-starring Lim Soo-jung, is the only Asian film in the competition pool.

Gracing the international silver screen doesn't seem like a bad way to have fans remember you while serving two-and-a-half years of mandatory military service at the notoriously tough Marine Corps (mention must also be made of how he received special permission from the Defense Ministry to visit Berlin before beginning the service next month).

"It's an honor to be invited to Berlin for two works. I'm wrapping up a chapter in my life as an actor. I'm about to mark a 'comma' (with the military service) and I'm ecstatic to have such a fortunate experience before doing so", Hyeon told reporters, Monday, following the Seoul press preview for "Come Rain Come Shine".

The occasion marked the star's last public appearance in Korea before joining the Marines. "I want to enjoy the festival as much as I possibly can, since there's a packed schedule for competition pieces. As for winning awards, I leave it up to Providence",he said.

Interestingly, both of Hyeon's films are love stories in which weather plays a pivotal role in setting the mise-en-scene. "Late Autumn - 2010", set amid Seattle's misty cityscape, is about a romance that unexpectedly blooms between a Chinese prisoner on compassionate release to attend a funeral (Tang) and a young Korean man on the run (Hyeon). 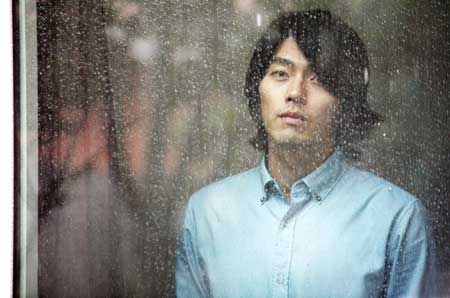 Director Lee Yoon-ki's "Come Rain Come Shine", on the other hand, traces the dynamics of a couple on the brink of divorce during Korea's monsoon season.

"A man and woman from different cultural and linguistic backgrounds not only fall in love but experience something beyond romantic feelings, and I hope the audience can perceive that", Hyeon said about "Late Autumn - 2010".

He said that his character may seem bright and bubbly but is really tortured inside, unable to express his true feelings ― the antithesis of Ju-won, the outspoken, arrogant heir he played in "Secret Garden".

His character in "Come Rain Come Shine", an introverted young man who silently helps his wife, who is leaving him for another, pack her belongings, is even more dissimilar to his TV persona.

"I had to tone things down a lot for my role, and I had to keep thinking about how to express myself without expressing too much.

"Viewers expecting to see Ju-won might be disappointed. But anyone can easily empathize with the experience of breaking up, which is heartbreaking but at the same time opens up the possibility for new beginnings and new kinds of joy. I hope the audience can relate to these feelings while viewing the film".

For co-star Lim, "Come Rain Come Shine" marks her second invitation to the Berlinale; her 2007 zany romance "I'm a Cyborg but That's Okay", directed by Park Chan-wook, competed for the Golden Bear and picked up the Alfred Bauer Prize.

"It was a great opportunity to work on an experimental film with such a talented actor and wonderful director", said the actress.

The Berlinale will announce its award winners on Saturday. "Come Rain Come Shine" is set open in local theaters nationwide on March 3.
"Late Autumn - 2010", which showed at the Pusan (Busan) and Toronto International Film Festivals, is set to compete at the Fribourg International Film Festival slated for March 19 to 26 in Switzerland. The melodrama will open in theaters here Thursday.

"Hyun Bin emerges as Romeo of the hour"
by HanCinema is licensed under a Creative Commons Attribution-Share Alike 3.0 Unported License.
Based on a work from this source