Hyun Bin To Enjoy Time Off Before Joining The Marine Corps 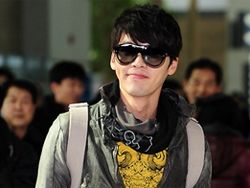 The actor returned to Korea, landing at the Incheon International Airport at 1:25 PM. He had left on the 15th for the festival where unfortunately, his film wasn't recognized through an official award. However, he did receive a lot of fanfare from the locals in the city, confirming that the Hallyu Wave is just as hot in Europe.

The young star will enjoy a couple weeks of rest, spending time with his family and friends before starting his mandatory military service on March 7th. This is his first real break ever since the drama "Secret Garden" catapulted him into mega-stardom.