"I Am Really Oh Ji-ho" - Special Disguise As A Fat Man in SBS, "Oh Sujung" 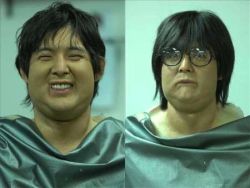 After Kim Ah-joong disguised herself in the movie, "200 Pounds Beauty", Oh Ji-ho is taking on the disguise as a fat man.

SBS "Get Karl! Oh Soo Jung" is the next drama to be aired after "Bad Couple", starting on the 28th. The male lead character played by Oh Ji-ho had to wear a special disguise to act as an unattractive man.

"Get Karl! Oh Soo Jung" is a drama about Oh Sujung who chooses to marry a partner solely based on their wealth and background, and when the unattractice Mansu fails his law entrance examination, she dumps him on the day of their wedding.
Mansu gets traumatized by this and sets on a path of revenge to transform himself, and after succeeding in America by eight years of dieting and exercise, he becomes a professional golfer who exceeds Tiger Woods in terms of wealth and looks.

The fat version of Oh Ji-ho will be shown in episodes one, two and three.