"I'm Not a Robot" Uhm Ki-joon, a genius engineering professor 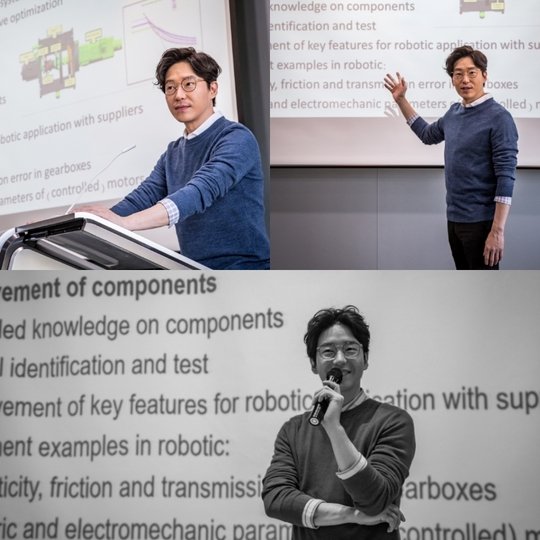 The new MBC drama "I'm Not a Robot", released stills of Uhm Ki-joon who transformed into a genius engineering professor. In the pictures, he's giving a presentation.

Uhm Ki-joon has starred in dramas "Ghost - Drama", "The Virus", "Masked Prosecutor", "The Attorney", "Killer Toon" and many musicals. He takes on a brand new character in "I'm Not a Robot", which is about a man who can't date women because he is allergic to them. In the end, he falls for someone.

Uhm Ki-joon takes on the role of Hong Baek-gyoon. He is the creator of the world's best humanoid robot Azi 3, but is lousy in relationships. Stills of Uhm Ki-joon increase anticipation for the drama. The professionalism and fluency of his presentation can be seen through the pictures and Newsen comments that he resembles Steve Jobs.

Director Jeong Dae-yoon said, "Uhm Ki-joon is a multi-player who can balance mellow and comedy equally. Hong Baek-gyoon is perfect for him".

"I'm Not a Robot" is a romantic comedy written by Kim Seon-mi-I and Lee Suk-joon-I and directed by Jeong Dae-yoon.

""I'm Not a Robot" Uhm Ki-joon, a genius engineering professor "
by HanCinema is licensed under a Creative Commons Attribution-Share Alike 3.0 Unported License.
Based on a work from this source