"I Want to Fall in Love with Someone in 2012": Top Rapper Miryo Makes Solo Debut with New Album

With her brisk activities Miryo stands out among a number of female rappers in Seoul's K-pop girl groups these days. Local media praises Miryo as the nation's best rapper. Still, Miryo is the member of Brown-Eyed Grils (BEG). The three others members are Narsha, Son Ga-in, and JeA.

Her album drew features from several artists including BEG member Narsha, Sunny of Girls' Generation (SNSD), and rapper Rude Paper. Rude Paper was found out in two years of Miryo's searching for her partner rapper in famous clubs in Hongdae and Gangnam areas.

Miryo's autobiographical lyrics are included in her songs.

Miryo revealed that her title song "Dirty" was based on her real love experience.

She said that "Dirty" is about a girl who commits a suicide as a way of punishing a former boyfriend who abandoned her for another woman.

But Miryo added that she is such a positive person that she never think about committing suicide.

K-pop sources in Seoul predict that BEG's JeA and Miryo might soon split solo, breaking from the girl group.

As recently as a month ago 31-year-old sexy Miryo confessed that she is so lonely and she wants to fall in love with someone in 2012.

"One of my goals this year was to release my solo album and I achieved the goal", Miroy said, "Another goal I want to accomplish this year is to fall in love with someone"

At the local interview, Miryo revealed what types of man she wants. 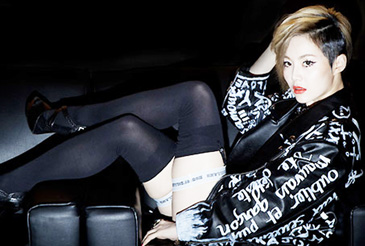 "I want to fall in love with someone for real this year", she added.

"Unlike the strong image on video I am actually a very soft and comfortable girl", Miryo confessed. "I want my fans to know that I am a very kind woman"

Miryo expressed her excitement about the release of her first solo album "Miryo a.k.a Johoney".

"I have been performing for the last 10 years as a member of Honey Family and Brown Eyed Girls", she said. "Now I finally had my solo album released"

She said that she will keep releasing her solo albums in the future.

"I want to include the music I make in my future albums as well", she added.

She said that she started her singing as a rapper when she was a freshman at ChungAng University's department of public relations.

""I Want to Fall in Love with Someone in 2012": Top Rapper Miryo Makes Solo Debut with New Album"
by HanCinema is licensed under a Creative Commons Attribution-Share Alike 3.0 Unported License.
Based on a work from this source