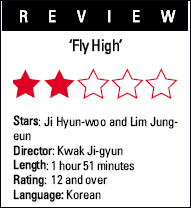 New melodrama Fly High (Saranghanikka Kwaenchana) is a story in which a young man falls in love with a young woman with a fatal disease and a limited time to live.

With its cliche storyline, the film fails to show new dimensions of love and it becomes a commonplace story that we have had enough of.

Directed by Kwak Ji-gyoon and starring Ji Hyun-woo and Lim Jung-eun, the movie revolves around Min-hyuk (played by Ji), an 18-year-old high school student, who loves dancing, and comic books.

He has never had a serious relationships with a girl until he falls in love with Mi-hyun (by Lim) at first sight. Min-hyuk believes that she is his soul mate and tries everything to win her.

Min-hyuk organizes sweet and cute little events for her. He secretly puts a bunch of flowers in her locker and sweeps a street clean of snow from her house to a main road.

But she keeps rejecting Min-hyuk's gestures and simply says that she doesn't like him. Without a word to him, she leaves for the United States, devastating him.

Two years later she comes back to Min-hyuk and confesses that she also loves him and there is not much time left for her as she will die soon due to her fatal disease. They decide to love each other intensely, making a day spent together as if it were 10 years.

The film can be divided into two parts _ before Mi-hyun leaves for the U.S. and after she comes back.

In the first part it is fun to see Min-hyuk doing his best to win his love with many sweet actions, words and gifts.

Actor Ji, who has been gaining popularity from television dramas, demonstrates his talents by playing a cute and warm-hearted guy.

But in the second part, when the tragic moment arrives, the audience gets lost.

The development of the story is too slow, and tragic scenes seem silly because of over-emotional acting and tear-jerking dialogues, which don't work.

The film created high expectations as director Kwak, a leading figure producing hit melodramas in the late 1980s, and popular television playwright Kim Eun-sook, famous for her works such as "Lovers in Paris" and "Lovers in Prague" teamed up.

But their combination was disappointing.

Kwak has reproduced the same old storyline from his heyday without new adaptations for contemporary audiences and Kim has merely repeated formulas that we have seen in her previous works.