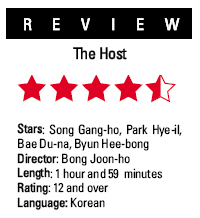 Local sci-fi films have been disappointing. They either clumsily render a futuristic world or create strange creatures that have the audience bursting into sudden laughter. Or simply, they are poor epigones of Hollywood blockbusters with flimsy stories. But that was all before director Bong Joon-ho's new film, The Host.

The film is technically evolved, in terms of visual effects, and has an interesting story, which Bong blends with his unique satirical humor to tackle social issues. It is now ready to write a new chapter in the domestic sci-fi film history.

The film revolves around Park Hee-bong (played by Byun Hee-bong), a man in his late 60s. Park runs a small snack bar on the banks of the Seoul's Han River and lives with his two sons, one daughter and one granddaughter.

The Parks seem to lead a quite ordinary and peaceful life, or maybe a tad bit poorer than the average Seoulite.

Hee-bong's elder son Gang-du (by Song Kang-ho) is an immature and incompetent man in his 40s, whose wife left home long ago. Nam-il (by Park Hae-il) is the youngest son, an unemployed grumbler, and daughter Nam-joo (by Bae Doona) is an archery medallist and member of the national team.

One day, an unidentified mutant suddenly appears from the depths of the Han River and spreads panic and death, and Gang-du's daughter Hyun-seo is carried off by the monster and disappears.

All the family members are in a great agony as they have lost someone dearest to them. But as they find out she is still alive, they resolve to save her.


The film's production budget is 15 billion won, and one third of it was spent for the creation of the monster, aided by the staff from the "Harry Potter" and "The Lord of Rings" series.

The result is quite satisfying as audiences can see the computer-generated images are successfully blended with real pictures without many flaws.

But the real beauty of the monster is that it doesn't overshadow the story and the film maintains focus on the people who fight against it.

Although there is no heroic character with supernatural powers or great ambition to save the world, the film has its own message _ seemingly weak individuals are the ones who protect what is worthy to them, not through the government's aid.

In the film's prologue, a high-ranking U.S. officer oversees the illegal dumping of toxic chemicals into the Han River, and it is not only a hint to how the mutant is born but also a criticism of the real accident in 2000.

In the film, American scientists claim the mutant is spreading a deadly virus, which turns out not to be true in the end, and it can also be seen as criticism on the U.S'.s false accusation that Iraq possessed biological weapons, a claim that the U.S. used in part to justify its invasion of Iraq.

"Host Rewrites Sci-Fi Film History"
by HanCinema is licensed under a Creative Commons Attribution-Share Alike 3.0 Unported License.
Based on a work from this source