Im Kwon-taek: directing beyond his years 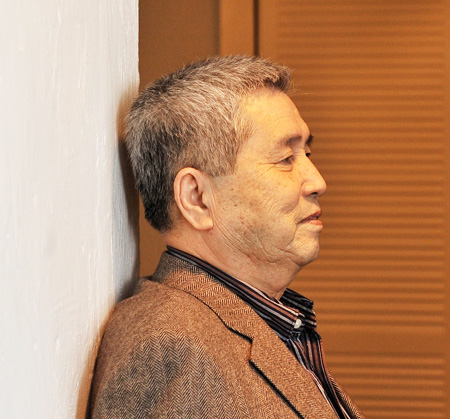 Im Kwon-taek poses for the camera in Seoul, Monday, before sitting down for an interview to speak about "Hanji". In his 101st film, the 75-year-old director captures the beauty of Korean traditional paper, "Hanji", and also poses questions about protecting artistic heritage. / Korea Times photos by Shim Hyun-chul

Im's 101st film explores madness in the mundane. "Why do people have to become crazy about preserving (things just because they're old)? But I wanted to show that we are losing something valuable right here, right now". 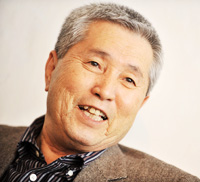 A surrogate mother falls in love with a man who wrongs her, a monk gives up her priesthood for earthly pleasures and an alcoholic artist paints masterpieces during drunken romantic affairs.

For his latest work "Hanji", veteran director Im Kwon-taek breaks away from such climactic dramas that mark his epic collection of 100 films. Instead, he discovers madness in the mundane.

"A bunch of lunatics try to make paper that supposedly lasts a thousand years, under the moonlit sky in the middle of the night. It's madness", Im said in an interview, Monday, in Seoul.

But unlike his previous stories such as "Beyond the Years" that trace reckless, impassioned pursuits to master a timeless art, the folly in "Hanji" reveals what has been lost and perhaps impossible to resurrect. 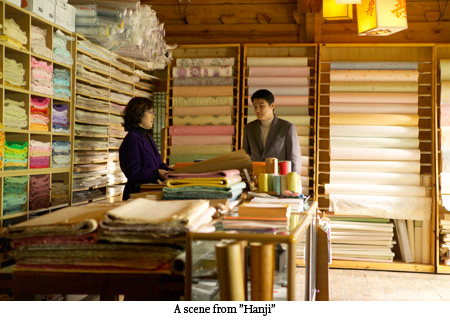 Inspired by a true story, "Hanji" is about Pil-yong (Park Joong-hoon), a middling civil servant assigned to revive Jeonju's traditional "Hanji" paper industry. What begins as a means for civic promotion turns into a consuming passion as he discovers the beauty of the craft, and he joins other devotees to reenact traditional methods of hanji-making under the moonlight.

Madness in the mundane

"It's impossible to make authentically traditional hanji today because of acid rain and polluted air, water and earth", Im said. At the same time, the cineaste said he was surprised to learn how hanji, albeit now rather synthetic, is used for everything from calligraphy to textiles and even car air filters. Only fine-quality hanji is suitable for storing certain ancient documents, he pointed out.

"We Koreans export electronic goods and cars. But among our products we are losing some of our most important assets, which are cultural treasures like hanji", the 75-year-old said with a sense of unwavering conviction. Though markedly fatigued by a series of interviews with press and visits to the hospital for diabetes treatment, Im beamed while speaking about hanji.

The crusading message for age-old traditions is not surprising for someone who has portrayed local art such as "pansori" (opera) in his films. But Im isn't one to conform even to his own standards.

"Hanji" calls to mind Olivier Assayas' "Summer Hours" starring Juliette Binoche. While it is about a family dealing with the death of an uncle who is a famous artist, in the larger scheme of things the French film poses questions about protecting artistic heritage. Im does something similar in his tale.

"I felt very torn by a number of questions. Are relics precious to us simply because they are old? Why do people have to become crazy about preserving it? But I wanted to show that we are losing something valuable right here, right now. Even if one is able to revive authentic hanji, there is no consumer".

The film, generously supported by Jeonju City, could well have turned into a promotional video for the craft that is native to the region ― one that could be considered rather offensive for international audiences since it compares hanji to its Chinese and Japanese counterparts. Even lead actress Kang Soo-yeon voiced concern that the film might turn into a documentary about the craft, said Im.

Yet, the director shows the reason for his longevity in the industry ― he limits the "learn how great hanji is" aspect to a documentary film-within-a-film, thereby also experimenting with the architectural structure of the piece.

"Jeonju City paid for a third of my film. One third was supported by the Korean Film Council and the rest by individual investors. But the Korean Film Council funds films after taking into account a filmmaker's credibility. Though I was able to make such a movie thanks to the generous support, I would be an ill-equipped director if I made promotional material.

"Under pressures that can be potentially dangerous, I chose to adopt aspects of documentary filmmaking to introduce hanji and tell a story that may lack larger-than-life drama but still be entertaining".

"Hanji" evokes laughter at times when it does not intend to, at least for those well-acquainted with the local film industry, as veteran cineastes including Kim Dong-ho and Min Byung-lock make cameo appearances, alongside members of Im's own family.

Cast members also include some of the hanji specialists that were actually involved in real-life events that inspired the film. "These cameos were neither actors nor amateurs. So instead of trying to make them act, I tried to restage and document the experience for them. It was sometimes a problem because the hanji specialists would call Park Joong-hoon by the name of the actual civil servant". 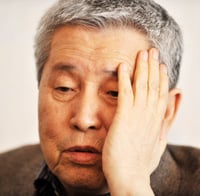 Another novel aspect of the film for Im was that it was shot digitally. The new medium not only saved production costs but heightens the realism of "Hanji's" documentary flavor.

"There were worries though, that people aren't as nervous (about getting everything right) on the site, since the cost of making NGs isn't as much as it is for analogue works. But this is just me, an old dinosaur speaking", he said.

What does he think of this digital age where big-budget flicks for the young dominate screens? Im believes it's healthy. "Everyone has his/her own role. Young directors are doing well, capturing their own rhythm of life in Korea. But my type of films should also be made. I hope to capture the attention of young audiences that are preoccupied with blockbusters".

Many artists have passed on works that uniquely capture their generation. Yet countless directors that defined local filmmaking by the decade fail to make comebacks, to create new waves amid the fast, fleeting trends that dominate and define the Korean film industry.

In an age that is consistently inconsistent, Im is the only one who has truly embraced Korea's past, as well as its history-in-the-making, by harnessing them to artistic ends. Im has created a unique audiovisual language that continues to evolve ― by shooting "Hanji" in digital format, he kept a promise he made three years ago to venture into the medium. Yet, at the same time, the veteran's oeuvre remains constant in that it voices universal concerns about the human condition.

But even Im has a past he wants to deny. In a recent talk show hosted by comedian Kang Ho-dong, the director said he wanted to abandon authorship of works he made in the 1960s. "I was trying to imitate Hollywood films, which was not only impossible technically but completely meaningless in that they portrayed lifestyles completely unrelated to our own.

"From then on I decided to make films that only a Korean could make. While directing films over the years, I've been making some significant works as well as utter failures, but I believe I was able to somewhat extend my life as a filmmaker by portraying quintessentially Korean lifestyles, sentiments and passions", he said.