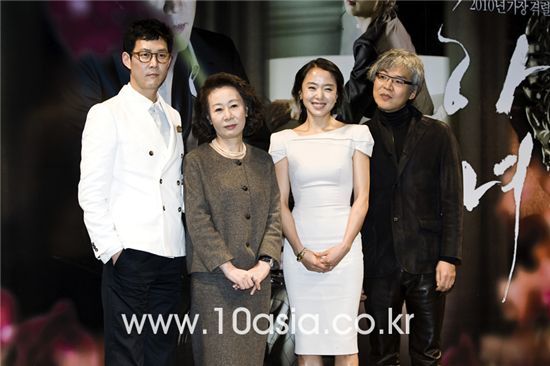 From left, actor Lee Jeong-jae, actresses Yoon Yeo-jeong and Jeon Do-yeon, and director Im Sang-soo pose during a photo session of a press conference for film "The Housemaid - 2010" held at a CJ CGV theater in Seoul, South Korea on April 13, 2010. [Lee Jin-hyuk/10Asia]

The appearance of director Kim Ki-young's 1960 film "The Housemaid" was an event in itself. It was an original attempt made amidst the rush of films based on literary works or the affection between lovers. The story of a house in which a young housemaid reminds the onlooker of a femme fatale, the wife who stands in contrast to the maid and the master of the house whose desires dangerously alternate back and forth between the two female characters, was a more strange and frightening experience than ever seen in a Korean film.

The "The Housemaid" in 2010, remade for the first time in 50 years by director Im Sang-soo took on a new cover -- as a 'erotic thriller' with a distinguished cast including Jeon Do-yeon, Lee Jung-jae, Seo Woo and Youn Yuh-jung. Jeon plays character Euni who starts working as the housemaid for an upper class family living in a mansion after she undergoes divorce, Lee is Hoon, the owner of the house who looks perfect and kind on the outside yet is full of arrogance, Seo Woo is the young lady of the house who is pregnant with twins and Yoon the old housemaid Byung-shik who has been keeping to the chores of the family for a long time.

The film, which even the cast expressed their high expectations for, is set for release on May 13. Below are excerpts from the press conference attended by director Lim, Jeon, Lee and Yoon on Tuesday. 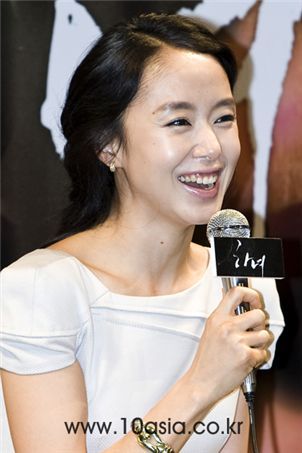 Q: You must have felt a lot of pressure in having to produce a remake of filmmaker Kim Ki-young's big screen production "The Housemaid - 2010" since it is considered quite the masterpiece in Korean film history. What did you pay the most attention to in directing the movie?
Im Sang-soo: "The Housemaid - 2010" is based on exactly the same story as its original -- about an odd housemaid who has an affair with the man of the family she starts working for. It's clearly different in terms of picture quality or scale since it's a remake of the film from 50 years ago, but you may be interested in seeing how much or how little change there has been regarding the circumstances the characters are put in or the way they act. Director Kim Ki-young is a maestro but I think I felt more confidence than pressure while creating the film. I also put in a lot of work into the art. I needed to do something different because issues regarding marriage in upper class is a topic which is always being handled in TV dramas. So I paid a lot of attention to providing enjoyment by trying to show what their lives are really like. And there are exactly six actors in the original film so I too concentrated just on them. It will be fun watching the actors act.

Q: Jeon Do-yeon, you must've thought a lot about whether you should take on the film or not because you had to do wire action, bed scenes and even get slapped in the face an outrageously large number of times.
Jeon Do-yeon: It wasn't an easy choice to make. And I did worry about a lot of things but I don't think I would have done it if director Im Sang-soo wasn't doing it. The original piece was received so well that I thought the only director who could overcome that pressure was him. I also didn't know from looking just at the scenario that my character Euni would have so much to do. (laugh) Physically, it was so straining that it felt that I was playing several roles at a time but psychologically I was happy and had fun. Even the hard time I had came as a pleasure to me rather than stress. 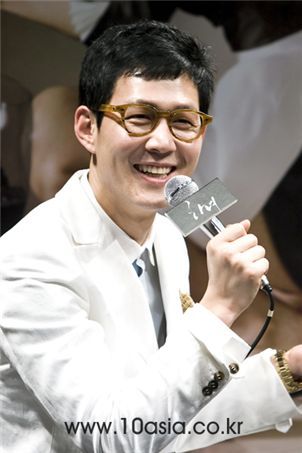 Q: Actresses' values or perspective on their job change after they get married or give birth. How was it for you?
Jeon: Not even once have I thought I would change in choosing a role as actress Jeon Do-yeon when deciding to get married. I'm Jeon Do-yeon so whether it be before my marriage or after my marriage, I didn't want to become different and I didn't want to change. But what I was more thankful about was that my husband and his family were the ones who didn't want me to change after I got married, even more than myself. They hoped I would stay who I am. My family played a big role in my decision to take on "Housemaid".

Q: How was it shooting the film as the only male actor on set? You worked with Jeon Do-yeon, Seo Woo and Youn Yuh-jung -- all actresses with strong personalities in every aspect.
Lee Jung-jae: I suffered from indigestion for three days after we all ate together for the first time before going into shoot. (laugh) Yoon has a strong personality, Jeon has a strong personality too and Seo Woo isn't any easier either. So I had a tough first day but the shoot itself was fun. I had expected it to be fun also because I would be playing the role of a bad boy. But it turned out that I wasn't the typical bad boy. My lines or the situation my character would be in was 10 times worse than what was in the script for every shoot so I was flustered at the time but I think that's more of the reason why I was able to have so much fun with it 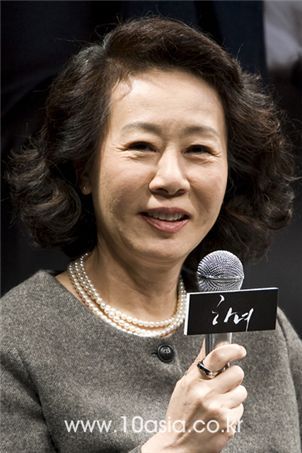 Actress Yoon Yeo-jeong speaks during a press conference for film "The Housemaid - 2010" held at a CJ CGV theater in Seoul, South Korea on April 13, 2010. [Lee Jin-hyuk/10Asia]

Q: Lim, the different bed scenes shown in each of your films, starting with "Girls' Night Out", have attracted much attention. There is much anticipation regarding the scene for "The Housemaid - 2010" also.
Lim: "There was a bed scene in "Girls' Night Out", also in "Tears", and many in "A Good Lawyer's Wife". But the actors play a much larger role than the director when it comes to bed scenes. And no matter how willingly an actor has agreed to play a role, he or she is bound to become sensitive when shooting bed scenes. I actually had to re-shoot Jeon and Lee's bed scene. It happened because I was using a new camera technique but I was so grateful when they readily agreed to shoot the scene again. And I think that gratitude I felt for them has been delivered well into the film -- I couldn't be happier with it.
Lee: The lines I said the first time we shot the bed scene weren't too bad but they had changed for the second shoot. And they were lines that I just could just not bring myself to say. I was told my lines for the scene had changed that very morning but it was just extremely shocking. So I thought hard about it for about five minutes. I couldn't even throw away the paper the lines were written on. I kept it until Yoon came onto set and so I even showed her what lines I had acted out. (laugh)

Q: We saw in the making-the-film footage that Jeon, you kept saying you're not sure about your character Euni. So when was it that you actually felt what she was about?
Jeon: It was difficult for me because I couldn't understand her innocence. I couldn't quite understand how she could be confident because she was overly innocent and how she could be honest because she was overly innocent. And I ended up finishing filming the movie without quite figuring out that about her completely. I had that question about her till the very end and constantly doubted myself while in shoot. The director trusted in me from the very beginning though, and at one point, I thought I might have been looking too hard for an answer. I felt more comfortable after telling myself that I myself might actually be who she is. 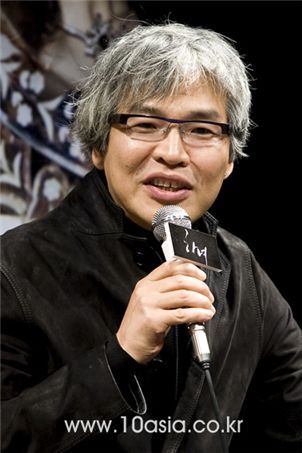 Q: So what are the main points to watch for in "The Housemaid - 2010" which is currently considered the most anticipated film for the latter half of the year?
Yoo: We were very happy while shooting the film. I didn't think much of the fact that Jeon had won an award at Cannes but I realized how great of an actress she is after working with her for the first time. I reflected on myself a lot after watching how she absorbs the director's directions like a sponge. I wondered whether I had her attitude when I was her age. I worked on the film while learning a lot from Jeon. Lee too said this film has been a turning point for him. Us three even pretended to die when the director told us to. (laugh)
Lee: It's not easy to maintain the mindset that you'll try your best from the beginning till the very end but with "Housemaid", everyone put in a lot of effort and we wrapped up shoot without any hitches. I think it'll remain a meaningful film for me.
Jeon: I too became moved and stimulated while filming with Yoon and Seo Woo. I had never wondered what sort of actress I would want to be when I grow older but watching Yoon, I thought I would want to look like her and have the passion and mindset she has when I too become a bit older. The points to focus on in our film is that it will be interesting for the eyes as well as the ears because everyone performed so enthusiastically.
Lim: "The Housemaid - 2010" doesn't deviate from the original story. You may think it's a very common story. And it could be a so-called "dead-end" drama because of its absurd plot but we've made it much more sophisticated through classy acting and classy art. I think we've produced a classy dead-end drama. (laugh)