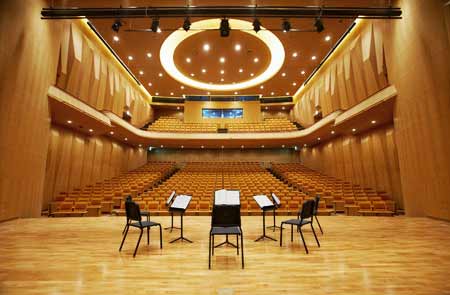 The recent opening of the IBK Chamber Hall - a new concert venue designed solely for chamber music - is bringing the world's top musicians in the field to Korea over the next two months.

The latest addition to Seoul Arts Center in Seocho-gu, southern Seoul, is generating much excitement for Korean fans and artists who have longed for the ultimate live chamber music experience in the nation's capital.

"There are several small concert halls in Korea, but none have been specifically designed for chamber music", said cellist Yang Sung-won in a promotional magazine published by Seoul Arts Center. "To develop a culture where chamber music is appreciated, we need not only a good repertoire and able artists, but also a suitable performing venue".

Violinist Clara Jumi Kang said that the lack of chamber music halls has been partly responsible for the underrepresentation of the genre by Korean performers. 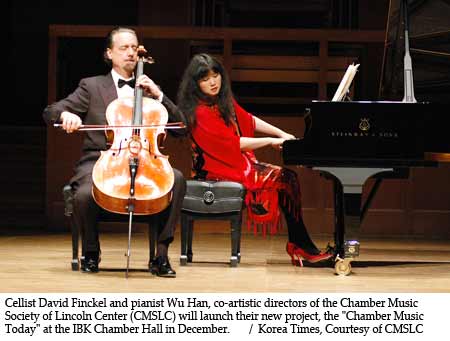 "The opening of the IBK Chamber Hall will hopefully enable local chamber music ensembles to reach remarkable achievements in the next 10 years", Kang said.

In countries such as Japan, chamber music halls are readily found even in smaller cities. In Western countries, old churches have often served as chamber music venues, in addition to the great halls they already have and keep building.

The IBK Chamber Hall officially opened Oct. 5 with a concert by soprano Shin Young-ok, a Metropolitan Opera star. This is the inaugural event in a series of 48 concerts of the "IBK Chamber Hall Opening Festival".

The festival is composed of three parts - the Classic Star Series, the Young Classic Star Series and the Ensemble Festival.
The final concert will be given Dec. 13 by the members of the Chamber Music Society of the Lincoln Center (CMSLC), one of the world's most esteemed chamber music ensembles.

Because the IBK Chamber Hall has a specific purpose to promote chamber music, the highlight of its opening season festival is the performances of several world-beating chamber music ensembles in December. 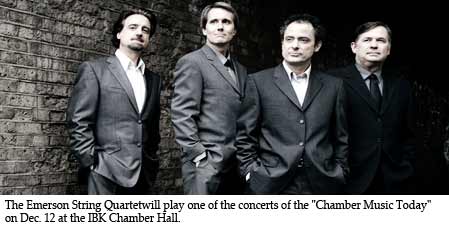 In particular, the members of the New-York based CMSLC will perform masterpieces by Mendelssohn and Schubert on Dec. 13.
Cellist David Finckel and pianist Wu Han, co-artistic directors of the CMSLC, and violinist Philip Setzer, a founding member of the Emerson String Quartet, will perform "Mendelssohn Cello Sonata No. 2 in D Major, op. 58"; "Mendelssohn Piano Trio No. 1 in D minor" and "Schubert Piano Trio No. 1 in B flat".

The concert is part of the "Chamber Music Today" project, a new festival founded by the two artistic directors of the CMSLC to take place in Korea annually. The project is expected to play a vital role in Korea's burgeoning chamber music scene, presenting the world's most esteemed artists.

"Chamber music is the music of friends. It is an international language that brings people together, and is, at the same time, one of the richest art forms on Earth", Finckel said in a statement. "Chamber Music Today will bring the greatest chamber music repertoire and performers to South Korea. In every concert, people will hear why chamber music has become an exciting, personal and essential experience for audiences around the world".

The Finckel-Han duo has appeared each season at the most prestigious chamber music festivals and concerts series worldwide.

They visited Korea in June for the CMSLC's third trip to teach in LG's "Chamber Music School", which provides free instrumental and chamber music coaching to young local talent.

The Emerson String Quartet and the Jupiter String Quartet will additionally take part in the Chamber Music Today project Dec. 11 and Dec. 12 with programs consisting of works by Beethoven, Dvorak, Mozart and Ravel.

Pianist Wu Han and the Emerson String Quartet will also play a benefit concert on Dec. 10 at the Seoul Plaza Hotel, presenting a program of Mozart, Mendelssohn and Schumann.

The establishment of the IBK Chamber Hall has been highly anticipated by local classical music fans. Composers including Schubert, Mendelssohn and Schumann, who produced some of the greatest chamber music, are being programmed more regularly in concert halls across the country to cater to a growing interest in the genre.

"We aimed at designing a space that can fully deliver the stage sound to the audience", said Kim Nam-don, the chief designer, in a press release.

The hall is equipped with the latest sound facilities and 600 seats.

Since its opening in 1988, Seoul Arts Center, the nation's premium venue for performing arts, has operated a main concert hall and a smaller recital hall.

The IBK Chamber Hall is the result of cooperation between Seoul Arts Center and the Industrial Bank of Korea to promote a deeper appreciation for chamber music. Construction began in January 2010.

For a full schedule of the IBK Chamber Hall festival, visit www.sac.or.kr/eng.