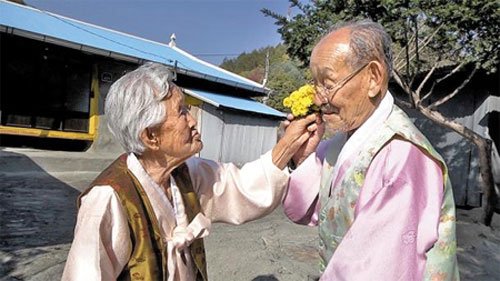 The indie documentary "My Love, Don't Cross That River", directed by Jin Mo-young, broke the box office record set by "Old Partner" on Thursday, 29 days after its release.

The film has drawn more viewers than the Hollywood blockbuster "The Hobbit: The Battle of the Five Armies", and is being shown on over 500 screens, competing with domestic films starring big stars such as "Ode to My Father", "The Con Artists" and "The Royal Tailor", released for the Christmas and year-end season. It also accounts for over 40 percent of occupied theater seats.

When it hit theaters on Nov. 27, it secured 156 screens nationwide, more than any other indie film, and topped the box office just 15 days after its release, edging out big-budget commercial movies.

The film is soon expected to beat "Begin Again", the most successful indie movie of all time in Korea, which drew 3.42 million spectators this year.