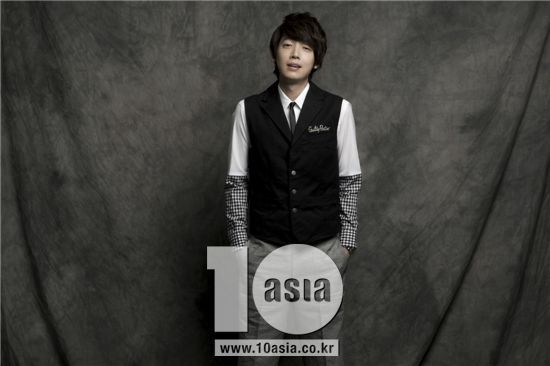 The first time 10Asia attempted to conduct an interview with Jung Kyung-ho was actually around the time SBS TV series "Smile, Love" was ending its run. Through the role of playing a hard-working and timid Kang Hyun-soo in "Smile, Love", it seemed that Jeong had come full circle on playing the type of characters that he often had in his previous works -- happy, handsome characters who appeared to have no particular problems but had a certain something that could not be easily fulfilled. Even the fictional couple in "Smile, Love" -- Hyun-soo and Jung-in (played by Lee Min-jung) -- were hugely adored by viewers. But at the time, he needed a break more than an interview and it was pushed back to a later date. At the present time, Jung Kyung-ho may be less "hot" than he was back then. But seeing him choose KBS' "Drama Special - The Great Kye Choon-bin" after he gained stardom through "Smile, Love", there are even more things 10Asia wants to know about him. Below is what we found out about the actor.

10: It has been quite a while since we saw you in SBS TV series "Smile, Love".
Jung Kyung-ho (Jeong): I had very little time to rest before I started working on "Smile, Love". I had consecutively shot films "Sunny", "Running Turtle" and SBS TV dramas "Princess Ja Myung Go" and "Smile, Love". And I was pretty exhausted so I took a little break this time. I went to Jeju island where my father is filming [Jeong's father is legendary television producer Jeong Eul-yeong who is currently shooting SBS TV series "Life is Beautiful"] and took a short trip to Japan. It wasn't really a long break, only about two months, but I feel like it's the first time I took that much time off.

10: But after the break, you made an unexpected choice to appear in KBS' "Drama Special". I thought you would choose a drama that would increase the popularity you gained from "Smile, Love".
Jeong: I have never thought that I wanted to be a more popular star, not even once. I don't choose my work to make myself look cool. What is important is whether it has a good story, a good director or who my co-stars are. In the case of "Drama Special - The Great Kye Choon-bin", which I just started filming, I chose to do it because my close friend [actress] Jung Yu-mi is in it, it has an interesting story and I have known the show's executive director Ham Yeong-hoon since I was young. The show has situations that are a bit unpredictable and funny. I think the drama will be jolly overall.

10: What is your character like? I heard you play an art therapist who is afraid of the dark.
Jeong: There are no so-called normal people in "Drama Special - The Great Kye Choon-bin". Everyone has his own pain, relies on others and wants to heal their wounds. My character Wang Gi-nam treats other people with art but he is really the one who should be treated and he doesn't even know that himself. Then he meets a plain girl named Gye Choon Bin (played by Jung Yu-mi), gets healed and learns how to make it through the darkness and to love.

10: In other words, he grows up in the story. You often play people who gradually mature -- like your characters in the films "Herb", "My Love Week" and in "Smile, Love".
Jeong: I think all the characters end up growing up inside the story. Just like my character in "Smile, Love" became a man when he met Jung-in (played by Lee Min-jung). I was able to show that process because I was lucky in getting to work with good directors.

10: Do you tend to be more attracted to such characters?
Jeong: I think it would be boring if the character stays too consistent throughout the story. When something happens, he will go through some psychological changes relating to the incident and he will face the next incident through those changes. The process will definitely not be the same. And I enjoy those changes that occur in the process.

10: In that sense, it was a bit unexpected that you chose to play an expressionless fugitive in the film "Running Turtle".
Jeong: I had a pretty tough time shooting "Running Turtle". My character was actually a very difficult one to play. I mean, if I had met a real fugitive in life I would know how to play one. (laugh) I tried to make my character talk less and cover his face up even more but I don't know which would have been better. But I got to meet [Korean actor] Kim Yoon-suk in that film, so I was able to learn a lot and grow as an actor.

10: You mean you want to grow up through the story, like your characters?
Jeong: I am twenty-eight years old and I myself feel that I am growing up because I was lucky enough to meet and work with a lot of great actors and directors. Just like my characters grow up in the films. So I like it.

10: You talked about working with senior actors and it seems you often work with people who have acted for a particularly long time. Like Choi Bool-am and Chun Ho-jin in "Smile, Love".
Jeong: Actor Kang Seok-woo even came to my first birthday party. So I really have to work hard. (laugh) I grew up watching these veteran actors since I was young and it is truly an honor that I get to work with them. Plus, the atmosphere on set was really fun. Actor Chun Ho-jin, who played my father in the show, guided me so that I could act naturally. I am truly grateful to him.

10: You must have learned a lot of good things from them not only acting-wise but also as a person.
Jeong: Of course. Actor Choi Bool-am gave me a lot of great advice. I read his book "About The Old Line That Life Is A Play And Humans Are Actors" and learned a lot from it in particular.

10: Perhaps that kind of atmosphere helped you portray your character Hyun-soo in "Smile, Love" more naturally.
Jeong: I try to keep it as natural as possible. I hung around and talked a lot with director Lee Tae-gon-I before the shooting and he wanted me to act like I wasn't acting. He told me to just be myself. Being comfortable on set, even I could see that I was acting comfortably. I try to make the acting natural in all my acting projects like it was in "Smile, Love".

10: But there must have been some roles that are hard to make seem natural.
Jeong: It was really hard to do that in the role of Choi Yoon in KBS TV series "Sorry, I Love You". And you know, there are characters who have jobs that are not easy to make seem natural. Like the national intelligence service agent in MBC TV series "Time Between Dog and Wolf - Drama" and the fugitive in "Running Turtle". But getting into such characters is also what makes this job appealing. If I prepare and make my character solid before the shooting, the drama comes out great. I try to work hard in that respect.

10: You mean becoming another person is appealing to you?
Jeong: Of course, any role I play is done by me Jung Kyung-ho and so it can't go outside of myself. I still lack in a lot of things and it is hard to live a completely different life like some famous Hollywood actors. But I think it is important to show myself comfortably and naturally within what I can do best as a twenty-eight-year-old actor. 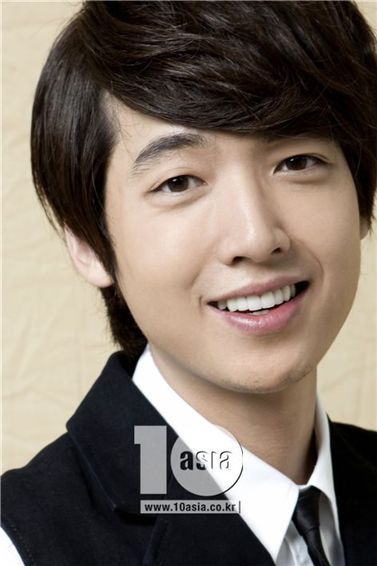 Actor Jung Kyung-ho poses during an interview with 10Asia.

"[INTERVIEW] Actor Jung Kyung-ho - Part 1"
by HanCinema is licensed under a Creative Commons Attribution-Share Alike 3.0 Unported License.
Based on a work from this source