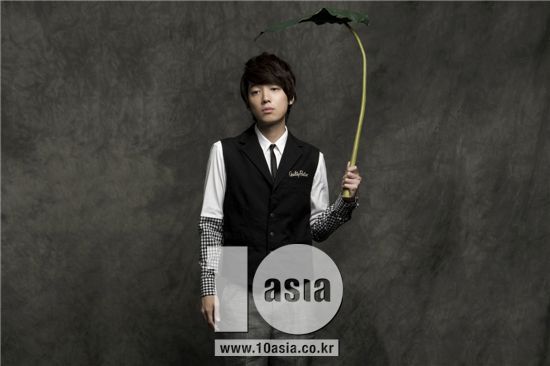 10: So what do you think actor Jung Kyung-ho is capable of showing?
Jung Kyung-ho (Jeong): I hate being depressed, it is just my nature. I try to be cheerful and I think there are some people who see it as a good thing.

10: Do you want to keep doing something you're good at or do you want to start showing some changes little by little?
Jeong: Right now, I just want to work on a good story with a good director and cast. That's what I enjoy.

10: However, there are some actors who are so nice that they can't take on their own share acting-wise.
Jeong: I myself have heard that a lot of times, how I can't manage my share. I don't think I gave it a lot of thought when I was younger. Now, I think that I should do my best and be responsible when I work on a project.

10: There is a difference between working hard and doing it well.
Jeong: Oh, it's different. That is why I feel a lot more responsibility, like how much love I can receive with this production. For instance, there will be a time when I won't be hired for a job I want if my current project doesn't do well. That is why you have to be responsible in everything you do.

10: So, as an actor what do you think is good acting?
Jeong: Just being natural. My biggest concerns are not to show off or swagger.

10: There is a chance that actor Jung Kyung-ho might not stand out.
Jeong: You just go with the flow like water. If I stand out, I would end up in the gutter. (laugh) I think I learned a lot about that after working with director Lee Joon-ik for the movie "Sunny". That you don't make a movie by yourself but with others.

10: There are some actors who are competitive with their co-stars but you don't seem like the type.
Jeong: I can't do that because I'm sort of timid. If they are mad, I try to cheer them up. (laugh) When I was shooting "Time Between Dog and Wolf - Drama", director Kim Jin-min-I was worried that actor Lee Jun-ki and I would be competing to see who the better actor is. He was worried that it might make things uncomfortable luckily, he said we both looked pretty comfortable. (laugh)

10: Are you the type to just melt in with the background?
Jeong: I think I'm the type of person who likes to be with others. I also like drinking. (laugh) When you spend time with someone for eight months it's inevitable that you become close like a family. When you're shooting a drama, it may be hard to form a relationship with the tight schedule but eventually as time goes by you become close. Five years ago I shot KBS' "My Sweetheart, My Darling" for about a year, and I still meet and keep in touch with veteran actor Lee Soon-jae and the rest of the crew.

10: Does that kind of stuff help with acting?
Jeong: The more relationships you form the more tiring acting becomes. (laugh) There are more stuff to worry about, like 'Is that person mad?' (laugh)

10: The reason I asked that question is, how do you further your acting skills outside of work?
Jeong: I would like to study more in any I can. I don't think I have ever studied for acting. I want to and need to read more books and also travel a lot. Up until now, I kept on working and learned a lot from the work, but I feel that I have more to learn outside of that. Actress Bae Jong-ok who was in the movie "Herb" with me, she reads many books and studies a lot. I don't know anyone who knows as much as her and she doesn't even show off about it. I envy that.

10: Watching a lot of good films and dramas is a good way to study. Do you by any chance watch any works by your father [director Jeong Eul-yeong]?
Jeong: Of course. I watch all of them.

10: What do you think about them?
Jeong: It's fun. I really like them, what can I say? In SBS' "Life is Beautiful", my father is great too but writer Kim Su-hyun is really incredible. How can someone who was born in 1943 write a story like that? I think she works hard and thinks a lot about her work. I envy her.

10: What does it mean to you as an actor to have such extraordinary people around you?
Jeong: After working in this field I really admire my father more than anyone. I think he is amazing and as his son I cannot imagine ruining my father's reputation. But that is not the only reason why I work hard on set.

10: You don't want to become a star and you aren't motivated by your father's influence. What is the biggest motivation for you as an actor?
Jeong: It's always more fun to watch people who have pain or have failed. Through acting I want to live out their lives and feel their emotions. What would I do if it were me. I like approaching characters like that and expressing their lives. 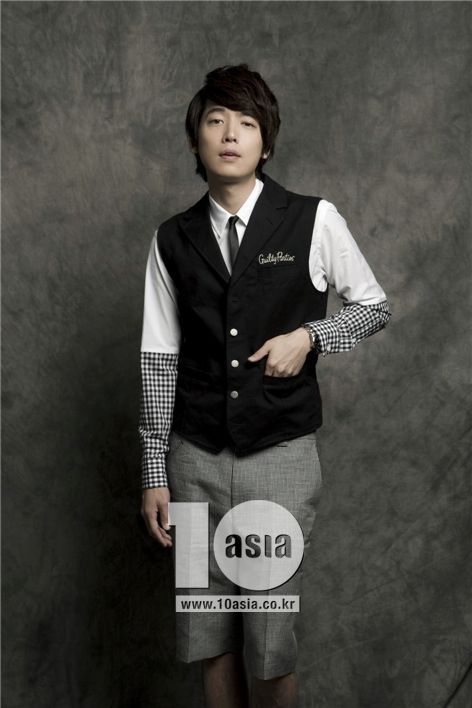 Actor Jung Kyung-ho poses during an interview with 10Asia.

"[INTERVIEW] Actor Jung Kyung-ho - Part 2"
by HanCinema is licensed under a Creative Commons Attribution-Share Alike 3.0 Unported License.
Based on a work from this source