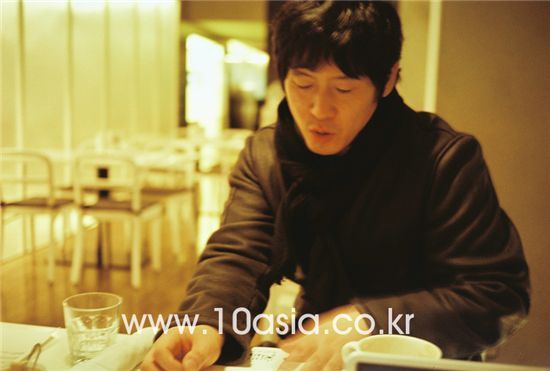 Sol Kyung-gu (Seol): Wow, it's been such a long time. I came here today with the thought of meeting an old friend, not to do an interview. Was the last time we met for an interview for "Rikidozan"? At the trailer on set in Bucheon?
Beck Una (Beck): Yes, you remember. That was the last time.

Seol: Ha... That's when I started going through rough times. "Rikidozan" flopped (laugh), I didn't have any work for eight months after that and then tried frantically to lose weight in a month to shoot "Another Public Enemy", going into a state of panic. You can guess how I was from the fact that I would ask the director, "Can we stop shooting today?"
Beck: Really? You're someone who would ask to do a re-shoot, not stop shoot.
Seol: Exactly.

Beck: To be frank, I think that's when it started. When, as an observer of the path you take as an actor, I started thinking 'What's this?' It seemed like you were going to another world.
Seol: Yes, that's right. I was living in another world. As of that point, the atmosphere of the film industry changed a lot, expert mediums in film disappeared one after another, there were less people I could talk to openly, a lot of things started becoming unfamiliar for me. Yes, "Rikidozan" was when it all began. A lot of things happened to me personally too and sometimes, I let myself be led to things which I didn't know the destination to. Not all the time but sometimes I would be led to things which weren't worth it.

Beck: So that may be why, but after "Rikidozan", the Seol I saw on screen was somehow not the Seol I had become familiar with.
Seol: I don't think I was myself. Should I say I was in an exhausted state? Or should I say devastated. There were some issues around me too.

Beck: Do you think you're doing a bit better now?
Seol: Yes, I think I'm doing much better now. I had been in shock after the opening of "Rikidozan", with the failure and all, but something was very weird. I might still be in that state... since I tend not to hang out with people who do movies anymore and actually don't go out at all.

Beck: It must've felt like people turned their back on you all of a sudden -- those people who had always complimented you and praised you since your debut. I think it must have felt like experiencing the hidden fangs the media and public had when they started talking about your personal life rather than your acting.
Seol: I think that's why I had closed up. Whatever I say, it would all come back in a similar nuance. That's why I ended up saying just the things I need to. People used to talk badly about me before but they don't even do that anymore. (laugh)

Beck: Your characters' identity as a father is the force behind your characters' actions in your films "Voice of a Murderer" and most recently "No Mercy". What thoughts do you have when it comes to your own dad?
Seol: I am such a bad son. (laugh) I'm not that close with him. But don't you think it's rare for fathers and sons to be close, especially Koreans in our generation? I talk with my mom at the least but (not with my dad) maybe because I know he is lonely and I don't want to become emotional about it.

Beck: Are you lonely too?
Seol: I'm lonely too. I don't express it but there are many times I feel like tearing apart my heart. And though I know how lonely my father is, I try not to get close to him even though I know. I also don't want him to be nagging at me since I'm over 40. (laugh) Some of my friends who have sons say they grow apart when they go to middle school. Dads are lonely people.

Beck: What sort of student were you when you were young?
Seol: What is this? Are you out to dig into my family's past today? (laugh) I was a kid who did not have much presence... average the whole way! I still remember the look on my homeroom teacher's face when I said I would major in acting. The completely dumbfounded look. I had actually meant to produce, not act, but it was an indefinite dream since I had never shot anything before because I didn't have a camcorder at home. When I occasionally see TV directors on shows, I would think, 'Wow, that is a real man's job'. They seemed like field commanders with their work clothes, dishevelled hair and the frowns on their foreheads. I became attracted to the pretentious aspect of the job of being a director. But when I actually got into college, I found out that everyone had prepared more specifically than I had. With French movies, cultural institutes. I was an ordinary person compared to them.

Beck: And that person ended up not producing films but becoming a stage actor.
Seol: Back in those days, we half-jokingly used to say that the annual income for a startup stage actor is 100,000 won. But I made 500,000 won the first time I started my job as a stage actor in my senior year of college. I really felt like I had become rich. I would have a pocket full of money when I fold up 50 of those 10,000 won bills into half and stick them into my pocket. Everyone used to say theater actors are hungry but I rather never was. And the next month I got paid 600,000 won. I received 800,000 by the time I was done. I pretty much received several years worth of other people's annual salary.