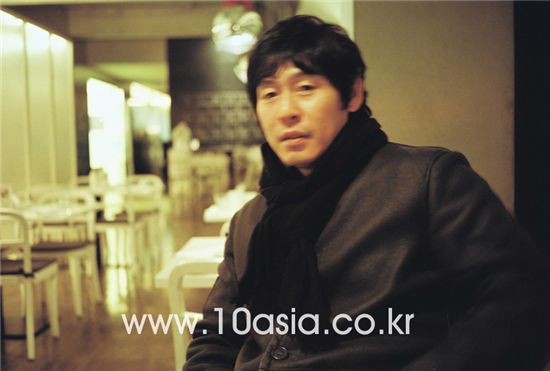 Beck Una (Beck): And that is when you decided to take the civil service examination.
Sol Kyung-gu (Seol): Haha. Let me explain that to you. I was dying to leave the Hanyang Repertory. I'd already graduated but that place was an extension of school while I wanted to meet a larger variety of people. I didn't think they'd let me go for no reason so I lied that I'm going to take the civil service exam. (laugh) But what's so spontaneous about me is that although I had left because I didn't like it, I didn't have anything to do right away. And I needed money but I didn't want to ask my parents for it so I ended up asking a senior of mine to give me a part-time job putting up posters. The interesting thing is that I ended up staying in the industry. Of course, if I had really taken off, I might have ended up becoming human trash. (laugh) Anyway, I had been at the job for about a month and a half? I was suddenly asked if I would want to take part in the musical "Line 1". Mr. Kim Min-ki had seen me about, putting up the posters and asked me if I would want to take part thinking that I'm hardworking. That had been my audition for it. Me and actors from all walks of life with all sorts of experience rehearsed for three months and wow, it was so much fun. That was the start of "Line 1". It also did very well. Before I took on film "Girls' Night Out", I was making two million won per month and drove a Sephia. (laugh) But after "Line 1", I had no work at all. That's when scenarist Lee Seon-mi, who used to do plays, recommended me to writer Jeong Seong-joo. And that is how I got to become part of the cast for morning TV series "Sisters". I think I'm a very person when it comes to human relationships.

Beck: Did you not think of taking on dramas after "Sisters"?
Seol: Why wouldn't I have? I was also asked to quite a lot. Not official auditions but one-on-one. But you know how you get glanced at from head to toe? I really hated the look they gave me when they do that. So after "Girls' Night Out" and then "Rainbow Trout", a man called Lee Chang-dong called me.

Beck: After he watched "Girls' Night Out"?
Seol: Yes, he said he hadn't planned to but did because his friends said he must see me. When we met up, he said he had wanted to see me and handed me the scenario for "Peppermint Candy". But he also told me that he needs investment to make a movie but it would be difficult to get one with my name. So he said he had just really wanted to see me and that we should work together next time if we get the chance. I read his script on my way back home in the subway in one go and I had thought 'Wow, this is like a novel'. Then one night, I got a call asking if I could meet with him if they came to my house. Director Lee Chang-dong and CEO Dong Bang-woo came to see me and asked if I wanted to do the movie. I told them I want to but I'm not good enough. I thought I would end up being an inconvenience. But they told me to come into their office tomorrow for an audition and I showed up the next day, acting out a scene where I put a gun to someone else's head. I used a comb for the scene since I didn't have anything else. Then the next day, I got a call saying I got cast for the role of Kim Young-ho. It turned out that Lee Chang-dong's wife, who had been watching the audition video, had said "There's your Kim Young-ho". I got goosebumps hearing that. It also turned out that the montage the art director had drawn of Kim Young-ho looked like me. I actually wasn't able to accept the offer until ten days later because I got so scared from hearing all that. I was also scared I might screw things up for director Lee who had made a sound landing in the film industry with "Green Fish" and Dong Bang-woo who was not running his film company on an abundant budget. But I ended up deciding to take it on. I told myself, 'I've never done movies so I'll never do one again if I mess up. I'll go back to theater. This will be it. The end!"

Beck: That's already ten years ago.
Seol: A reporter recently asked me to which point in my life I would want to go back to and I answered "The day 'Peppermint Candy' opened". I desperately miss those days. The people and the mood of those times. I was so excited to do this interview too. I so missed the time when I cried during the interview with you. And I desperately miss the New Years Day in the year 2000 when I was had fun with fake snow in front of Piccadilly Theater. I also remember late actress Lee Eun-joo coming to my house with her mom and handing me a four leaf clover. "No Mercy" opens on January 7 but it's still on the first week of January. So it's been 10 years. Exactly 10 years. Back then, people who make movies, actors and reporters, it felt like we were all colleagues. We had a sense of solidarity as people doing similar work. But it doesn't exist anymore. I had thought ten years is very short but it's been very long. So much has happened.

Beck: And then it must've been sometime around the year 2002. I started thinking you're a real case after seeing you star in film "Oasis, "Public Enemy" and "Jail Breakers - No. 815". It seemed weird how you could didn't just work with, but work well with directors Kang Woo-seok and Kim Sang-jin after having worked with Lee Chang-dong. Of course, it would be ridiculous for an actor to ponder on a director's taste and disposition but I thought there was just a huge gap between these directors. That's why I thought to myself: 1. Seol is surprisingly calculative when it comes to social life. 2. Maybe Seol goes for anything and doesn't have any taste whatsoever. I had suspected the former to be true but when I look back on it now, I realize it was the latter. You really did go for anything. (laugh)
Seol: Me? I am. If I like it, I go for it without calculating anything. Of course, I do have my own sterotype about some people but I'm not someone who follows other people's opinions. I wasn't that concerned with how some people were speaking of director Kang and I thought the scenario for "Public Enemy" was fun and extremely eccentric. That's why I told myself, "Heck, I'll do it". I actually had more problems after shooting "Rikidozan" because I started thinking with my head too much. I decided which role I would take on next before I was done filming it. Because I was pressured about receiving scenarios and so hard to turn them down. So I think I started controlling what I do, trying to balance out the roles I'm taking on for each film. I now know how stupid I was in doing that. People like me aren't meant to use their brains. (laugh) I took on "No Mercy" without calculating anything. It just hurt so much reading the last 30 minutes of the script... the loss you feel when you just can't seem to solve your life that seems infinitely screwed up. But of course, I did a bit of calculating in that I told myself that I should take on this film because director Kim Hyung-woo would take the reigns. (laugh)

Beck: I think communication between an actor and the cinematographer is even more important than how he communicates with the director.
Seol: Undoubtedly. Since the cinematographer is the last person who captures the acting. We had a great time working together and I trusted him while working on "Voice of a Murderer". You don't know how hard I tried to get him to work on "No Mercy". (laugh) I'd always be willing to work with Kim Woo-hyung. He's a man of few words but you have no idea how cute he can be. He sends cute text messages too. (laugh)

Beck: I think the pool of male actors has become large compared to times when we used to say Choi Min-sik, Song Kang-ho and Sol Kyung-gu lead on the Korean film industry. Of course, you must've also been pressured by the fact that you are always up for comparison but it still seemed that you all talked a lot and looked out for each other. Don't you think the actors are more individualistic now?
Seol: Nah, that's not true. When were we ever not lonely? In the end, actors stand alone. That is why we are all sort of mentally ill. It's a bit different with the actors from "Haeundae" though. We keep coming up with some excuse or another to meet up often. We're a queer team. I don't know whether it's because we were all stuck shooting together in a provincial location or because the film did well. But we throw birthday parties for each other and will all go to hang out on set at some actor's shoot. We somehow keep meeting up.