"I don't think I was not popular", Song said when asked how popular he had been since he had acted starting from his high school days in plays, but instead of a modest answer from him; he jokingly smiled and claimed it was true. The child who was "quiet yet played with others but at the same time was kind of scholarly" has stood on many stages and in front of numerous cameras, attracting the attention of others to gain the nickname of a 'refined playboy'. Currently, he stars in SBS drama "Life is Beautiful" as Yang Tae-sup, a homosexual physician. 10Asia met with actor Song Chang-eui and below are the excerpts from his interview.

10: Since taking on your role in "Life is Beautiful" you have been getting many compliments on how 'pure and innocent' you look. What is your secret? (laugh)
Song Chang-eui (Song): Really? I didn't know. (laugh) I lost some weight after deciding to take this role. I don't know if this applies to everyone but most homosexual people care about their looks, so I worked out a bit and my clothes were chosen by my stylist. 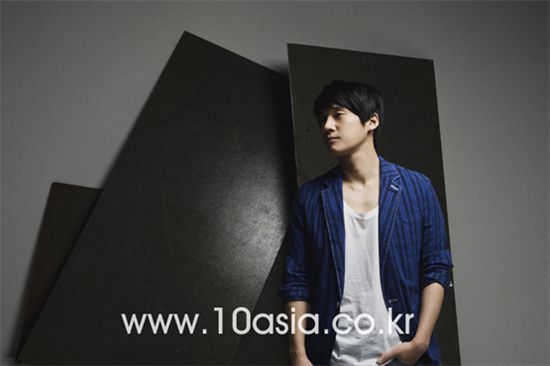 10: Recently, your character Tae-sup garnered a lot of attention after coming out to his ex-girlfriend Chae-young (played by Yoo Min). What did you feel?
Song: I was worried about viewers' reaction to my acting because playing the part of a homosexual in a drama isn't an easy thing to do. But I was amazed with how well they accepted it, thanks to the scenarist and director who did a great job in relaying the storyline, and also I realized that our society has changed a lot over the past several years. I think they have come to accept it in a cool way where they think 'it’s possible'.

10: What came to mind when you first received the offer for the role of Tae-sup?
Song: Director Jeong Eul-yeong offered me the role and at the same time explaining that my character would be a homosexual. I had many thoughts about the role but the first thought that came to mind was, 'Why did they create this character?' then, 'Will I be able to pull this off?' and finally, 'Is it right to play this role?' However, I thought about how not many actors could pull off this role and decided to play the role thinking it will be an unforgettable production.

10: I think you must've felt a different type of pressure taking on the role even though you had played the role of a transgender before through the musical "Hedwig And The Angry Inch?”
Song: Yes, Hedwig is completely different from Tae-sup. Hedwig is such a strong character, his life is full of ups and downs and one-of-a-kind, while Tae-sup is just a regular guy who is normal except that he likes men, so instead of 'normal' he fits the category of 'not-the-typical' person in our society.

10: If that is the case, how did you go about approaching your character Tae-sup?
Song: The first thing I think about when portraying a character is to think about how he usually thinks. In the case of Tae-sup, unlike how he seems on the outside, he has a complex and grotesque concern. I thought that Tae-sup is someone who grew up trapped alone in a world of his own after his parents got divorced and wondered, 'Is my new mom taking care of me because she really loves me?' after his father remarried, no matter how good his stepmom is to him. On top of that, he was having a hard time because he felt that he couldn't get along with other people because of his sexual inclination but becomes happy after meeting Kyung-soo.

10: So is that why Tae-sup is somewhat stiff when he is around his family but comfortable and brightens up when he is with his boyfriend Kyung-soo (played by Lee Sang-woo)?
Song: That is because Kyung-soo is sort of a releasing channel for Tae-sup. It's not like Tae-sup has set up a wall against his family but it is difficult for him to mingle with them completely because of his secret, while on the other hand, he can be himself completely in front of Kyung-soo. If it wasn't for Kyung-soo, Tae-sup will probably be a wreck. But Tae-sup is slowly beginning to reach out to his family after Kyung-soo starts visiting his house. He is constantly happy, he'll act coquettishly to his mom and even help clean the bathroom. It shows that he is one shrewd guy. (laugh) 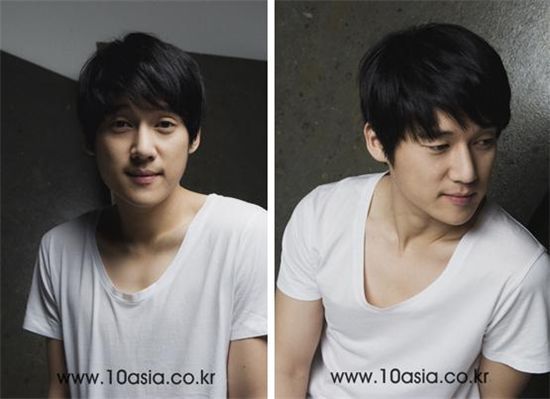 10: When scenarist Kim Su-hyun gave the role of Tae-sup and Kyung-soo to you and Lee, I heard that all she asked for was you two to love each other. So this isn't an issue of technique but fundamental interpretation. What was your understanding of her remark?
Song: I think what she was trying to say is was not to love in the way a man loves a woman but how a person loves another person. If I loved someone, I wouldn't feel uncomfortable being in the same space as that person, I would look at that person's eyes easily, and naturally feel that I want us to spend more time together. The most important part of the role was trying to relay that naturally. Regardless of whether it is a gay or straight relationship, when the two look beautiful together, those who see them will feel, "They are really in love and it is sad to see them having a hard time".

10: Have you become close with your partner Lee Sang-woo? I saw a picture of the two of you on your mini homepage.
Song: I tried hard to become close with him quickly. Of course we spend many hours on set for the shoot but in order to become friends quickly, we go drinking together, to the sauna and also work-out at the same gym. Whenever we have free time we would play catch or swim.

10: Most of the shooting for "Life is Beautiful" takes place in its backdrop Jeju Island. This is rare occurence for dramas.
Song: We'll rotate between shooting the drama on Jeju Island for about ten days and then about four to five days in Seoul. Going back and forth between Seoul to Jeju is hard both physically and mentally because the weather in Jeju changes often. But as time goes by, I've begun to adjust to the situation and enjoy spending time at Jeju now because it is such a beautiful place. When the actors are shooting in Seoul, all of the cast members don’t spend much time together because of their busy schedules but in Jeju we spent a lot of time together and gather to eat. I think it's a good experience because I don't think I will have another chance to work on a drama with this kind of system.

10: How did it feel working in an environment where scenarist Kim is popular for continuously attending script readings?
Song: I was really nervous at the first script reading. I thought it would be organized and solemn to suit the name 'Kim.Su.Hyun'. However, scenarist Kim treated all the actors like her own children including Yoon Da-hoon and Kim Sang-joong who she had worked with before in the series "Sauna Boys". You could feel that even from the script because she refers to the characters as 'child'. For example, in the case of Tae-sup and Kyung-soo, she would write "the two children walk up". And from what I've heard from someone else, she will ask about what physical and mental state in mind her actors are. When it comes to acting, she doesn't engage in pointing out an actor's acting down to every little detail but focuses her explanation more on the character's thoughts and intentions. The rest is up to me.

10: Which scenes make you think that most when you're reading the script?

Song: In all the scenes where the topic of homosexuality appears. It makes me think a lot rather than being difficult. It was like that in the scene where I say "I felt like walking down the hallway of the hospital with a megaphone and shouting out I am gay", and also about how far I should go in terms of physical contact. When you see Two Guys together, they can seem like two friends in a way but I wonder how far I should go to make us seem like lovers while also trying not to let things go too far. Sang-woo and I shared similar thoughts on this and we are adjusting how we should go about this. 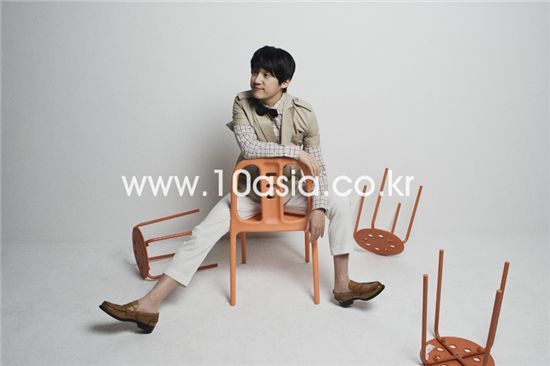 Actor and musical star Song Chang-eui poses during an interview with 10Asia.

"[INTERVIEW] Actor Song Chang-eui - Part 1"
by HanCinema is licensed under a Creative Commons Attribution-Share Alike 3.0 Unported License.
Based on a work from this source