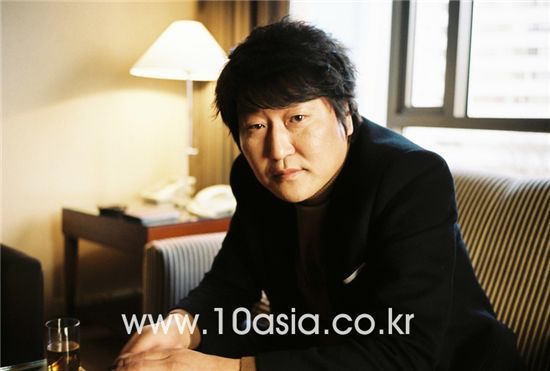 Beck Una (Beck): When I saw you at the Pusan International Film Festival last year, you said not to expect much from "Secret Reunion" and joked that it was just a movie where you rode on actor Gang Dong-won's popularity from film "JEON WOO CHI : The Taoist Wizard". But "Secret Reunion" turned out to be much more commercial.
Song Kang-ho (Song): I needed it to vent my spite from "Thirst". It was for the film! Hahahahaha!

Beck: You are usually very critical of your own films compared to other actors. What is your take on your film "Secret Reunion"?
Song: Hey, how can you ask such a question to an actor whose movie is about to open in theaters? It's an extremely commercial film, so... that's good! And I think the audience will like it.. so that's good too! But to be honest, "Secret Reunion" is not a film which delves deeply into its theme so as an actor, and on a very personal level, it is a bit disappointing too.

Beck: But you already knew that when you read the script and decided to do the film.
Song: Yeah. But you know.. people get crafty after achieving a certain goal. You wish the film had more of this, and get greedy about that.

Beck: So you're being one of the greedy "haves"!
Song: Ahahahaha! What I like about "Secret Reunion" is.. that it's light. It doesn't try to get too serious, it is very light and breezy but says everything it needs to. I like that. Of course there are disappointing parts to it too but it's not anyone's fault. It's just how this movie is or aims to be. Director Jang Hoon must have had a lot to worry about as a director. When you look at the ending, in particular, reality is actually much more harsh than it is in the film. So he could have been more greedy and pushed forth his writer instincts but he ended up providing a flexible response.

Beck: Sometimes on set, there are veteran actors who express their views too aggressively to a new director. I heard the ending or plot gets changed too sometimes because of what the actor says.
Song:If I were the director, I would have chosen an ending for "Secret Reunion" in which the pain lasts longer. Then the movie would fail! And I would never be able to direct again! Ahahahaha. But I am an actor, and once an actor decides to take on a film, I don't think that actor has the right to have a say in the film's plot. That is the director's right and solely his. Of course, I could offer my opinion on minor matters being part of the staff for the film. I think director Jang Hoon did a clever job of balancing various requests while maintaining his ground. 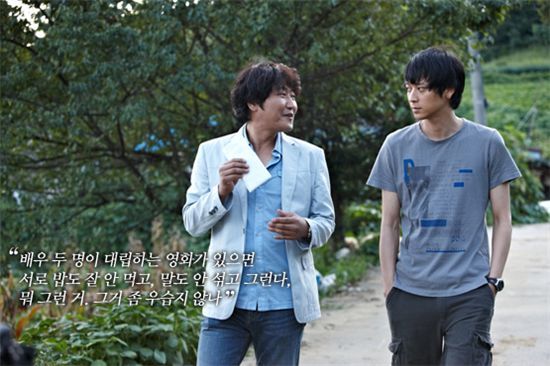 Beck:In the case of "Secret Reunion", the film focused entirely on the relationship between two men so that bond was particularly important. But Song Kang-ho and Gang Dong-won? It seemed that you two would have nothing in common and that it would be difficult to become close with each other. Wasn't Gang Dong-won a little picky or difficult to work with?
Song: That's what I thought of him too in the beginning, so I asked some actors who had worked with him in "JEON WOO CHI : The Taoist Wizard" and surprisingly, they told me that he talks well and drinks a lot too. And he really does. He's not just a good-looking guy but is also a deep thinker. He is actually a bit of a straight arrow but he doesn't try to be what he isn't and rather likes revealing his sturdy side. And that is appealing too because it makes the other person feel comfortable. It was easy to work with him too.

Beck: Complimenting your co-stars gets a little old, doesn't it? (laugh) So sometimes one starts to wonder, does being close with the cast create a synergy effect? Or is there a better outcome when a certain level of tension is maintained?
Song:Luckily, I have never had to work with anyone I felt uncomfortable around. So I'm not sure but in my case, I think the outcome is better when I have a good relationship with my co-star. I sometimes come across articles where, you know, when two characters in a film are on bad terms, the actors themselves also don't eat together and don't even talk to each other, things like that. Isn't that a bit funny? You know.. it's not like they're in war, ahahahaha. In such cases, I think it's better to become friends and have fun. Of course, as his senior, I made the effort to make Dong-won feel comfortable on set but I didn't do anything past that. I don't intentionally approach him to become closer either.

Beck:In an interview for "JEON WOO CHI : The Taoist Wizard", Gang Dong-won once said that there is no such thing as actors learning from each other. Personally I believe that, after a certain period of being a newcomer, professional actors cannot be judged simply by their filmography so I nodded at what he said. But as an actor who worked with him, weren't you a little disappointed at his attitude?
Song:That is the charm of Gang Dong-won! Even when we're drinking, other junior actors would say things like, 'Sir, please teach me about acting', but not that boy. I really like that about him. The reason Dong-won said something like that was because he probably hated the monotonous, conventional thought that 'He is a big senior actor and I am young, so I should learn a lot from him'.

"[INTERVIEW] Actor Song Kang-ho - Part 1"
by HanCinema is licensed under a Creative Commons Attribution-Share Alike 3.0 Unported License.
Based on a work from this source